Born in Ferrara on December 31, 1842, died in Paris on January 11, 1931. Eighth of thirteen brothers, he received his first drawing lessons from his father Antonio, a painter and copyist of the Neo-Renaissance style, and, from the age of sixteen, he attended the studio of the brothers Gaetano and Gerolamo Domenichini and of Giovanni Pagliarini in Ferrara. In 1862 he moved to Florence to enroll in the Academy of Fine Arts, where he attended the painting courses of Stefano Ussi and Enrico Pollastrini and the group of friends Cristiano Banti, Telemaco Signorini and Michele Gordigiani who met at Caffè Michelangiolo. In this period "Macchiaiolo" paints not only portraits, but also landscape subjects. Between 1865 and 1866 he moved between Castiglioncello, a guest of Diego Martelli, and Naples, together with his friend Banti (Portrait of a man looking at a painting, Portrait of Diego Martelli, The painter Giuseppe Abbati). In 1867 he went to France for the first time with the English nobles Falconer: at the Universal Exhibition in Paris he met the impressionist painters Édouard Manet, Alfred Sisley and Edgar Degas. In 1870 he stayed in London, thanks to the support of the patron William Cornwallis-West, and the following year he moved permanently to Paris, relying on the art dealer Goupil. While he began to establish himself as a portraitist, he devoted himself mainly to costumed works and urban views (Place Pigalle, Place Clichy): in the Salon of 1874 the works Les blanchisseus and Pont des Saints-Pères are admired. After several trips to Germany, Holland and Spain (1876-1877), he abandons the previous descriptivism and reaches his most characteristic figure by treating bourgeois portraits and moving subjects with ease. From this moment he is the greatest representative of the portrait of the time, worldly or representative: the famous pastel portrait of Giuseppe Verdi is from 1886 (Portrait of Giuseppe Verdi with the cylinder, Rome, National Gallery of Modern Art). At the Universal Exhibition in Paris in 1889 he presented eight works, including the aforementioned portrait of Verdi, the famous White Pastel, portrait of Emiliana Concha de Ossa, grandson of the ambassador of Chile to the Vatican (1888, Milan, Pinacoteca di Brera) and the watercolor Les amis, the latter awarded respectively with the Grand Prix and the gold medal and with a diploma of honor. In 1890, together with Sisley, Blanche and Rodin, he joined the Societè Nationale des Beaux-Arts founded by Meissonier and Puvis de Chavannes. In 1892 he executed the famous Self-portrait for the collection of the Uffizi Gallery in the Villa Banti di Montorsoli, obtaining in exchange a cast of Bernini's Cardinal de Medici. The following year, on the occasion of the Milanese gala of Verdi's Falstaff, he gave the musician the oil portrait painted seven years earlier in the studio on Place Pigalle (Portrait of Giuseppe Verdi, Milan, Retirement Home for Musicians, Giuseppe Verdi Foundation ). In 1895 he was a member of the patronage committee of the Venice Biennale; he participates in it in 1897 with the Portrait of Giuseppe Verdi with the top hat and other works; the same year he exhibited in the Wildenstein gallery in New York. In 1900 he presented eight works at the Universal Exhibition in Paris, including the portraits of the Infanta Eulalia of Spain (1898, Ferrara, Museo Boldini) and of the American painter James McNeill Whistler (1897, New York, Brooklyn Museum). In 1895, 1903, 1905, 1912 he was invited to the Venice Biennale (in 1895 he was on the Patronage Committee). With the great war he is forced to leave Paris and subsequently stay in London and Nice. After the conclusion of the conflict, he returned to Paris again, where in 1919 he was awarded the Legion of Honor. In 1926 he was interviewed for the Gazzetta del Popolo by the journalist Emilia Cardona who in 1929 became his wife. He died in Paris a little over two years later, in 1931, at the age of eighty-nine. In 1932 seventy works of portraits, landscapes, genre subjects and drawings were gathered in a room dedicated to him at the XVIII Venice Biennale. His rapid and dynamic brushwork portrayed aristocratic personalities, actresses and high society ladies: the portraits of the Spanish general Esteban de Seravalle de Assereto (1867, Valdagno, Marzotto Collection), the various portraits of Countess Gabrielle De Rasty ( including Countess De Rasty sitting on an armchair, 1879, Ferrara, Boldini Museum), by Emiliana Concha de Ossa (or White Pastel, 1888, Milan, Pinacoteca di Brera), by the actress and soprano Lina Cavalieri (portrayed more times between 1900 and 1921), by Count Robert de Montesquiou (1897, Paris, Musée d'Orsay), by the great French playwright Edmond Rostand (Portrait of Edmond Rostand, circa 1909, private collection), by the Venetian marquise Luisa Casati ( Portrait of the Marchesa Luisa Casati with a greyhound, 1908, private collection; The Marchesa Luisa Casati with peacock feathers, 1914, Rome, Galleria Nazionale. 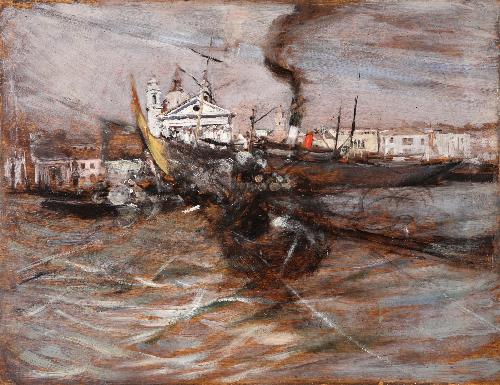 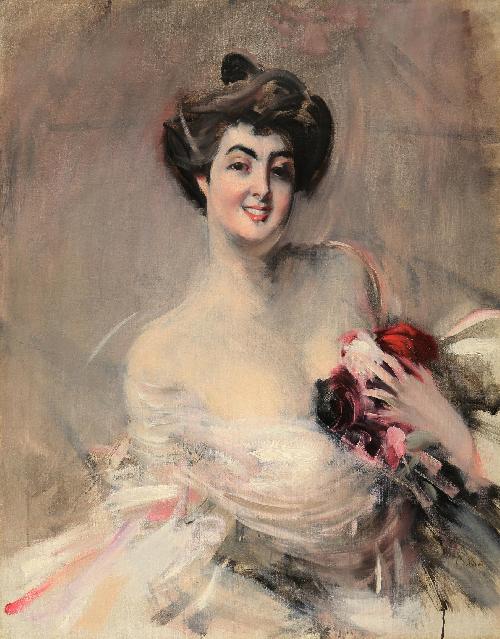