Born in 1838 in Vigo and died on 23 August 1916 in Valladolid, Spain. He completed his studies at the San Ferdinando Academy in Madrid, where he was a pupil of Antonio Maria Esquival and Bernardo Villamil Marrachi. Already in 1858 he distinguished himself with the watercolor "A miña tristura", awarded with a silver medal at the Exposición de Galicia. After a short stay in Portland in the United States (1858), he went on a scholarship first to Geneva, where he studied with the landscape architect Alexandre Calame, then to Italy. His stay in Liguria in 1863 and his definitive move to Genoa in 1866 introduced him to the circle of painters of the Gray School, Tammar Luxoro, Ernesto Rayper, Alberto Issel and Alfredo D'Andrade, thanks to which he surpassed the academicism of the Spanish masters and del Calame, to adhere to the new poetics of truth. With the Grays already in the autumn of 1863 he painted from life along the Bormida in Carcare, near Savona, also joining the representatives of the nearby Rivara School (Motivo sulla Bormida, 1865, Genoa, Civic Gallery of Modern Art; Lungo la Bormida, around 1866, Genoa, Ligustica Academy of Fine Arts). Soon, however, the common interest in Camielle Corot, Charles-François Daubigny and Antonio Fontanesi's naturalism was replaced by a predilection for "spot" painting, personalized by an intense and brilliant palette, foreign to the other Grays (Spring , post 1868, Imperia, Civic Art Gallery). Through exhibitions and stays in Tuscany, he gets to know directly examples of contemporary Tuscan naturalism, to which he refers in the subsequent production and where he reveals a rigorous compositional system that accentuates the tonal values ​​(Convento alla Castagna, 1875, private collection; Lo scoglio di Quarto, 1881, Genoa, Civic Gallery of Modern Art). Participates in the Genoese, Turin and Florentine Promoters from 1867 to 1896, in the National Exhibition in Parma in 1870 (View of Savignone and Moon Effects), in the National Exhibition of Rome in 1883 (Under the olive trees) and in the Exhibition of London of 1909 (The Bay of Livorno). In 1896 he returned to Spain and remained active at least until 1910, the year in which one of his countries appears at the Florence Exhibition. His works, in addition to those mentioned in the Genoese public collections, are kept in the Gallery of Modern Art in Piacenza Ricci-Oddi (In the park), in the Gallery of Modern and Contemporary Art in Turin (En la ria de Vigo, purchased from the Turin Promoter in 1894, and La rosa), in the International Gallery of Modern Art in Rome (Spring), in the Museum of Villa Verdi in Sant’Agata, in the province of Busseto (Il Viatico and other landscapes) and in the Museum Nacional de Arte Moderno in Madrid (Idyll, Fountain in Galicia, On Lake Maggiore). 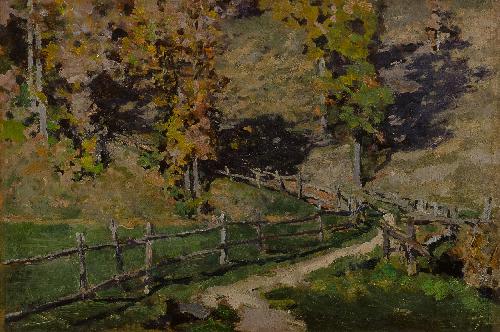 Hinterland of the Riviera di Levante - 1890