Born in Busseto on 3 September 1826, died in Cavoretto (Turin) on 15 September 1899. He attended the Academy of Parma under the guidance of Paolo Toschi and the set designer Boccaccio. Dissatisfied with the lack of uniformity of direction in the teaching that was imparted to him, he left these masters and began to work alone as a lithographer. He made a successful collection of views of the Castles of Parmense and Piacentino. After participating in the First War of Independence, he went to Paris and took up residence in the studio of Eugenio Ciceri, a renowned lithographer. In 1853 he stood out at the Salone for a lithograph, Le Soir. In 1855 he was able to follow a French diplomatic mission, headed by the minister Prospero Bourée, a lover of fine arts; and with that he traveled for over a year in Persia, in Turkey, in Arabia, studying that characteristic environment and accumulating impressions that were no longer to be erased from his mind. His paintings, exhibited especially at the Paris Salon, achieved great success, and were highly sought after. He was hailed as one of the best orientalists, certainly "the most delicate and luminous ...." although "more descriptor than poet", as Ojetti notes. He also traveled to Greece, and traveled through Spain with the painter Gérome. Then the beauties of Venice attracted him, and he went there several times, always bringing back impressions that he was able to fix in his paintings with effective color and rare harmony. After the French political reversals of the 1970s, he fixed his abode in Cavoretto, and there he tirelessly painted until the last few years, so much so that in 1897 a painting of his oriental subject appeared at the second Venetian International. Stop of Syriac knights. Long would be the listing of his works; suffice it to say that 101 studies and sketches of him appeared in a retrospective exhibition held in Venice in 1909. Among the best known paintings are: Attack of Drusis on a Maronite village; Constantinople Market; The stage of the caravan, in the Parma Museum; Door of a bazaar, in the Galleria d'Arte Moderna in Rome, where the Grand Canal is also found, exhibited in Milan in 1881; The walk of the odalisques; The escort of the Pashas; Venice from the Giudecca; Rezzonico, Foscari and Balbi palaces; Door of the Hall of the Two Sisters; Rio San Severo; Rio in Santa Maria Formosa; Grimani Palace; Panorama of the Sierra Nevada; Door of a mosque and palace of the Generaliffe; Alhambra Mosque; Horses grazing in Syria; An arch of the facade of San Marco; Group of irregular knights at the door of a mosque; Door of the Mariani palace; Courtyard of the Lions in Granada; Turkish market; The relay, exhibited in Busseto in 1926, on the occasion of the twenty-fifth anniversary of Verdi's death, of which Pasini had been a close friend and belonging to Mr. Ferdinando Colonna of Turin; Way leading to the Bosphorus; A corner of the garden in the harem and San Giorgio Maggiore, all three in the collection of Signor Vittorio Artom of Turin; Stop of a caravan in Persia, property of Mr. Angelo Sommaruga of Paris; The Golden Horn, in the collection of comm. Lorenzo Delleani of Carignano; Caffè Greco of Rome, in the collection of Count De Minerbi of Stresa; The courier of the desert; The Nile; Hawk hunting; Sunset of the sun and Interior of the Issogne manor: all in the Civic Museum of Turin; Corner of courtyard in the East; Persian kiosk in Constantinople and Bazaar in Constantinople, all in the Galleria d'Arte Moderna in Milan. 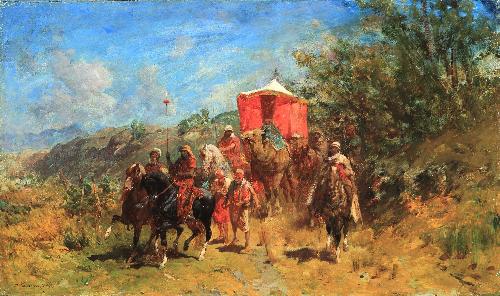