Born in Naples on March 19, 1861, died in Genoa on April 9, 1940. He attended the Neapolitan Academy, disciple of Domenico Morelli, Stanislao Lista, Gioachino Toma. Later he settled in Genoa. A fruitful, eclectic artist, he exhibited in many national and international exhibitions in Venice, Bologna, Milan, Genoa, Turin, Munich, Rome, Florence, Verona, Berlin, Paris, London, Santiago de Chile, and was awarded in Genoa in 1892, and in Paris in 1900. All his works are treated with vigor, both in color and in form. Among the most important are: Colombi, exhibited in Paris in 1900, now in the Munich Gallery; Giuseppe Mazzini, in the Municipality of Genoa, and his great pastel, Giardiniera, in the Gallery of Modern Art of the same city; Triste alba, sent to Milan in 1906, and belonging to the Gallery of Modern Art in Rome; At school with the nuns, in the Gallery of Modern Art in Milan. Other paintings by him: The winch; Plowing in Lomellina; The light of pain (Deposition); In the pigeon house; A blessing ray; A beneficial hand; Old environment, new life; In dovecote; A porch of a florist in Genoa; Capri; Shepherd with sheep; Pasture with cows; Tale; Young Genoese florists; Piazza Bandiera (Venice); Venice; Rest; The nest in the basket; Cow in the stable; The port of Genoa; Autumn sun; Genoa; Fishmonger; Misappropriation; Second hay cut; Castagne, purchased at the Venice International in 1901 by Alfredo D'Andrade; Stable interior (pastel) in the Turri collection in Milan; At the Toce delta; A greeting; Autumn evening on the Adda; Ottobrata; The mother; The end of a dream; Little girl with grapes; Full moon on the banks of the Adda; Evening on the Adda; Autumn; On the Mottarone; Blessed humiles; Evening; The work of the fields; Shearing; Countryside on the evening; The seamstresses; The air, the water, the fire; The artistic editor; Ligurian sea; Fish market of Genoa; Christ on the waters; The useless storm of life. The subject "the doves" was repeated by the artist many times. In addition, he painted numerous portraits of illustrious personalities: he Holiness of him Benedict XV; Monsignor Bonomelli; S. E. Leonardi-Cattolica; Luigi Rava; Hon. C. B. Magnaghi and many ladies of the Italian and foreign high aristocracy, including the splendid Genoese Paola Lotterò, who became princess of Saxony-Weimar. Pennasilico belonged to the group of painters who are members of the Genoese Artistic Family and Mario Agrifoglio, Antonio Schiaffino, Orlando Grosso and other artists were formed in his school. 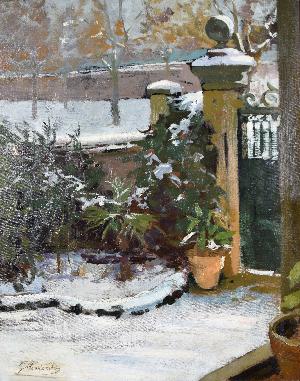