Born in Mondovì on 5 January 1844, died in Turin on 23 November 1898. He studied at the Accademia Albertina in Turin, a pupil of Gaetano Ferri, and exhibited for the first time in 1863, in Florence and Turin. Then he was present at all the most important Italian and foreign art events: in Munich, Vienna, Dresden. At first his paintings had literary historical references, as in Vittor Pisani in prison (1863) and in Hamlet in the cemetery (1866). Then, refining his sensitivity through the knowledge of other artists such as Pisani and Fortuny, he turned to the genre painting in costume and finally to the popular one, to which he remained faithful all his life, thus becoming the true genre painter, representative of Piedmont. Attentive, clear, limpid, interesting for the calm tonal unity of his paintings, even if they are so dry, drawn and descriptive, the Quadrone is one of the many artists who with genre paintings fed the lively Italian painting in the neoclassical and romantic era, before the vivifying breath of impressionism. He was nicknamed the "Piedmontese Flemish", and this name suits him well, not only for the masterful execution of his paintings, but for the ingenious and imaginative realism with which he was able to make a trifle interesting. He lived a lot in Paris, where he met Meissonier and De Nittis. He also stayed in Sardinia, drawing some of the most effective hunting scenes from it. In Turin in 1892 he was awarded the King's gold medal, and the great gold medal was also awarded in Florence, in 1897. Many of his best works cannot be listed here because as soon as they were finished he sent them abroad. to clients and art dealers. At the Turin Promoter he exhibited: in 1867, Margherita; in 1868, The musician gentleman; in 1869, The ambush, which is now preserved in the Civic Museum of Turin, with Ronzino Sardo, exhibited there in 1888; An old sedan, exhibited in 1890; Country study (Sardinia); Shameful! (The model); leoni and Sant'Antonio at the burial of the hermit San Paolo, donated by the Quadrone family, and 21 between drawings and studies. In 1870, again at the Promoter, he presented In rest; in 1871: In time of peace; A jester, currently in the collection of Eng. Ercole Norsi of Turin, and Portrait; in 1872, Bottega; in 1875, Quattr'occhi; in 1880: After the performance; A naturalist; A painter in the studio; The judgment of Paris and the second circus, which was re-exhibited in Venice in 1895 and then in the 19th century exhibition also held in Venice in 1928; it is currently in the collection of comm. Carlo Quadrone of Turin. In 1884, the following paintings appeared at the National Exhibition of Turin: Provvisione in Sardegna; Market in Piedmont; In Sardinia and Charity. Again at the Promoter's Exhibitions he presented: in 1886: itinerant merchants and A stop; in 1887, Per Voyage; in 1888: Alle rumpes and itinerant Suonatori; in 1889, After a joke; in 1891, clandestine hunter. At the II Biennale Veneziana (1897) he sent Prelude of a battle; in Florence, in the same year, Time threatens. At the comm. Delleani di Carignano preserves the largest and most beautiful collection of works by this artist; we mention: Return from the market; The two puppies; Confidences; A blast; Plowing; Killed, wounded, missed; In town; In firm; Jester with dogs; Sardinian subject; The selfish; Battle of dachshunds; Difficult statement; Return to the farm; General cleaning. The Gallery of Modern Art in Rome owns him II return. Other paintings are found in private Italian collections: Statement, at the Successors of P. Presbitero in Turin; Departure for hunting in Sardinia, in the collection of Mr. Ferdinando Colonna also from Turin; many abroad. 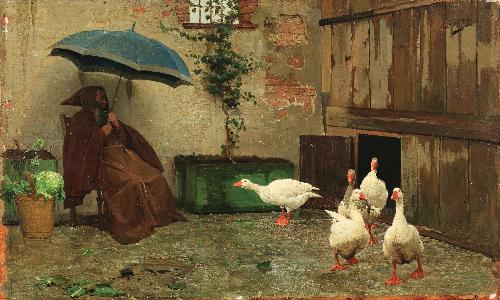