He was born in Turin on November 3, 1855, and died there on February 21, 1928. His first teacher was Ghisolfi, from whom he learned the first notions of drawing. Then, he attended the Albertina Academy for a few years, a pupil of Lorenzo Delleani and Antonio Fontanesi. He ended up going to Paris (in this city it was in 1878, 1888 and 1900), where he was struck by the art of Corot, so much so that in some canvases he followed his dictates. But much of his work is influenced by Avendano and above all by Filippo Carcano. Finally, he was influenced by Marco Calderini. He exhibited for the first time, not yet twenty years old (1874), at the Circolo degli Artisti in Turin; then he was present at all national and international exhibitions, often awarded, with landscapes and seascapes. Tried several times by misfortune for the loss of beloved children, and for reversals of fortune, he always sought comfort in art, even if this did not give him those gains that he could have aspired to. His paintings are cited: In Piedmont, exhibited in Naples in 1877; La quiete e Natura mesta, presented in 1880 in Turin; In October; Sul Canavese and Rive del Po, sent to Milan in 1881; Return from the pasture, exhibited in the same city in 1883, with Lungo il Po in Turin, now preserved in the Museum of Verona; Surroundings of Turin, exhibited in the same year in Rome; The banquet and Last Leaves, which also appeared in Rome the following year; Gray weather in the port of Genoa and Venice, exhibited in Florence in 1885; Sad day; End of August and The Port of Genoa, presented in Milan in 1886; Morning in the mountains; Rain in the port of Genoa; Railway station in Turin; September in the mountains and Sun veiled, exhibited at the National Exhibition of Bologna (1888); Among the mountains, sent to Florence in 1889; Under the chestnut trees; March smile; Autumn morning; Canavese countryside, now in the Civic Museum of Turin with Calma vespertina; Quiet cantuccio: all exhibited at the Turin Triennale of 1896. This last painting, presented the year before at the annual Brera Exhibition in Milan, had earned him the appointment as honorary member of the Academy itself. In 1897, to the second Venetian International, he sent Meridian Peace; in 1899, Sasso di ferro (Lake Maggiore) and Meriggio on the beach of Varazze; in Milan, in 1906, at the exhibition organized on the occasion of the opening of the new Simplon Pass, he introduced Meriggio to the Marina; Alpine solitude and Harmonies of the sea; in Rome, in 1911, at the International Exhibition of the Cinquantenaire, Calma autunnale; at the post-war I Quadriennale in Turin (1919), Alpine hamlet; to the following (1923): Last Rays and Autumn Harmonies; to the last one (1927): Meriggio al mare and In autumn; and, tirelessly, at the maritime exhibition organized in the same year, he sent Meriggio to Capo Noli. Many of his works were purchased by Umberto I and Vittorio Emanuele III; others from royal principles; Landscape, figure in the “Paolo e Adele Giannoni” Modern Art Gallery in Novara. Numerous are part of private collections in Italy and abroad. At the XXVI Venice Biennale (1952) a commemorative was set up for him with nineteen works. 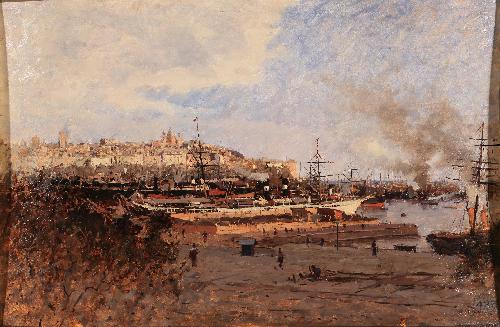