Born in Genoa on 8 December 1863, died in Pianfei (Cuneo) in 1950. He first studied with Moradei in Ravenna, then in Turin, at the Albertina Academy. He made his debut at the Turin Promoter. He exhibited at the most important exhibitions in Italy and abroad. In 1892 he won the national competition announced by the Municipality of Genoa for a painting representing the port of Genoa during the Colombian holidays. In 1898, at the Glaspalast in Munich, he exhibited the March Night painting, which was purchased for the Weimar Museum. In the same year he presented La nave dei morti in Turin, and the following year, at the Venice International, Notte nel porto and Marosi. In 1901 he exhibited Notturno in November. In 1906 at the Milan exhibition he sent Mattino d'autunno to the Riviera; In the port and Evening in Bogliasco. A vigorous sailor, he produced a large number of works on this motif. At the 1910 Venetian exhibition he presented twelve: Lo scoglio degli appiccati; The old bridge; Dusk by the pond; The lullaby of the sea; Moonlit night; The burst; Storm from the sea; Harmony of trees and waters; The sun goes down into the sea; Morning in Civitavecchia; The white mill and Adriatic Maremma; in 1912, eleven: The song of the sunset; Dutch night; In the small port; Rest of sailors; Dutch countryside in the rain; The little thing of the cypresses; Procession; Flowering swamp; Old houses by the sea; North Sea and Night; in 1914, Tramonto sul mare and Chiesina sul mare; in 1920, Sul Baltico and Canzone marina; in 1924, Egloga and La Madonnina del mare. Abroad he exhibited in Paris, Krakow, Vienna. He was present at the Turin Quadrennial: in 1902 with: Spring in Liguria; Vespero d'autunno and Monastero al mare; in 1908 with: Night on the North Sea and Evening of March (Riviera di Ponente); in 1919 with: Return from the pasture; The Sanctuary fair; Under the moon; Evening in Aesnaes (Denmark); The flowers of the river; To Cornacchia; Gray Harmony and Calm Hour (North Sea); in 1923 with: Winter morning in Dordrecht (Holland); Spring on the sea and Flowers on the rocks; in 1927 with: Winter evening on the North Sea and Santa Margherita Ligure. In the same year he participated in the Maritime Art Exhibition and in the LXXX National Exhibition of Palazzo Pitti, in Florence. Paintings by him are in public collections: Country and Departure for Fishing, in the Gallery of Modern Art in Rome; When the sun has descended into the sea, directly donated by the author to the Civic Museum of Turin; Bogliasco, in the Gallery of Modern Art in Milan; other works are found in the Museums of Genoa (linked by testamentary will) and Lima. The abundance of production has determined the need for a certain selective rigor. Numerous posthumous exhibitions have been dedicated to him in Genoa, Cuneo and other Italian cities. 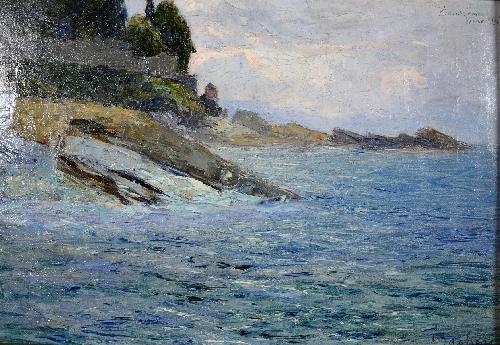 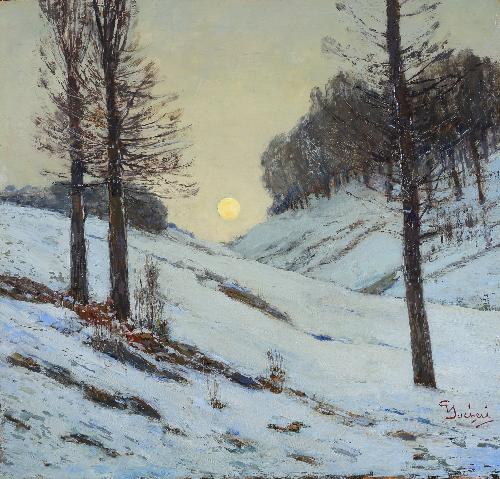