He was born in Milan on January 24, 1859, and died there on December 20, 1924. Descending from a noble family from Brianza, he studied painting and architecture at the same time with Boito at the Brera Academy. The sunset of June 4, 1859 (After the Battle of Magenta) was the first painting he exhibited, and earned him the Mylius prize. Later he appeared with a large number of works, especially watercolors, in various manifestations; in 1880, in Naples, with the Interior of the Milan Cathedral; the following year, in Milan, with: Return to the mountains; Arrival of the steam; Rezzonico; The friar; Under the porch; Laughs and smiles; Military walk and stream in Valtellina; at the Exhibition held in the same city in 1883 with: After the galleries; Real impression; Summer memories; A landslide; Grand Canal of Venice; The whirlwind; In the park, and three watercolors; and to that of Rome, with: Surroundings of Varese; Outside of Varese; Rustic courtyard near Milan; Souvenir of Venice; At the door; Smiles in the summer; Peace of the mountains; The beach; Return to the plain and Le Sponde del Ticino (the latter two in watercolor). Established by now as a skilled watercolorist, he presented at the Milan Exposition in 1886: Hyde Park; Westminster Abbey; Oxford Street; Broad Sanctuary Westminster; Fleet Street; On the Mersey Liverpool; Trafalgar Square; and the following year, in Venice: Blessed Age; Poetic journey; Dogs; Streets of London; Riviere of Verona. After a trip to the Americas, he executed Our ancestors, owned by the Municipality of Milan, and which, exhibited in 1894, aroused lively discussions; Dura lex sed lex, purchased by the President of the Argentine Republic; Each one for himself and God for all; Arcadia. Recovered from the desire for travel, he visited England, Holland and Russia and in the latter country he painted notable paintings, such as the Moscova banks; decorations in the Hall of the Leningrad Conservatory and in the Caucasus decorative works in private palaces. Hardworking and skilled organizer, he was for a long time President of the Lombard watercolors. He participated in the exhibitions in Paris, Berlin, Venice, Rome. At the Milan International Exhibition on the occasion of the inauguration of the new Simplon Pass (1906) he presented among other things: Portrait; Emilian Apennines; On Westminster Square; in Rome, in 1907, at the Amatori e Cultori, In the kingdoms of snow and Maggio; to the Venice Biennials he sent: in 1912, Stagno and Triumphalis hora, watercolors: the latter preserved in the «Paolo and Adele Giannoni» Gallery in Novara, where there are also: Gli amboscati; Vogogna from the railway; On the terrace of the Mergozzo valley; Montorfano from Lake Mergozzo; The Bernina waterfall; On Lake Mergozzo. In 1914, again at the Venice Biennale, he sent Ave audaces and Antenati; in 1920: Old Russia; Rustico and Piccadilly Circus (owned by Antonioli di Milano); in 1924: The Kremlin; Winter greyness and Fire on the mountains; at the Female Portrait Exhibition held in Monza in the same year he presented: My little girls; My daughter Irene; Portrait of a family and Portrait of a young lady. Among his most noteworthy works, we should mention: Trasparenze, with which he won the Prince Umberto prize in 1908; A stop in the Pampas; Shadow fishers; Avant l'attaque; Surprises from the wind; Pale hours; Ford. 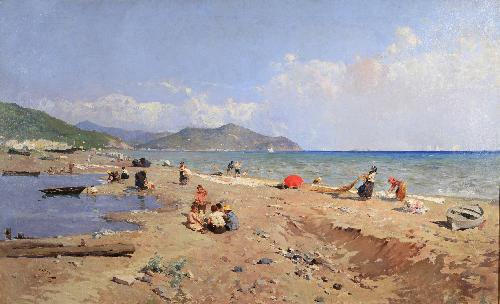