Born in Florence on 18 August 1835, died there on 10 February 1901. He was initiated into the study of art by his father, Giovanni, modest painter of the Grand Duke of Tuscany, copier of galleries. "Art and homeland entirely occupied our young painter, who in 1853 and 1854 threw himself into Mazzinian conspiracies with others" (Enrico Somare, "History of the Italian Painters of the Nineteenth Century">. In 1856 he went to Venice to to study not only in the Museums, but for the calli and the canals, and there he befriended many foreign artists. On his return to Florence, he had the first works rejected by the Promotrice exhibition and was attacked by the critics of the conservative newspapers who were keen to discuss in various ways the Macchiaiuoli technique and that of Signorini in particular. From this epoch and for a long time his life was a long artistic odyssey through the cities of Italy and abroad. He was in Siena, Rome, Naples , in Paris, in London, then in Ravenna and in Vinci, where he illustrated with etchings the book on "Leonardo" by Uzielli, then again in Paris, in London, in Scotland. Nature had in him a passionate, free and personal; daring in the co to achieve the correctness of the tones, in neglecting the shape of things for the immediate rendering of color, as shown by the numerous tablets sketched quickly, full of shadows and lights brought back from life with the boldness of the broad and frank brushstroke. «The greatest and absolute value of Signorini's painting - wrote the witty and combative Adriano Cecioni - is the feeling of intonation in all of his works; even in the most incorrect the feeling of intonation never fails ». Given the taste of the time, one can understand how some of his excessively risky works in the chiaroscuro (and Signorini himself recognized it) raised harsh criticism. The ghetto of Florence, now in the Galleria d'Arte Moderna in Rome, was called by Camillo Boito, "without design, without form, very violent in color". Even today it is judged so excessively; but these excessive judgments harm the critic as much as they do the artist. In fact, Signorini walked towards an increasingly calm and more solid art. Around 1880 he reached the perfection of a second maturity. «It is the Settignano era. A feeling of human joy and almost of pictorial enthusiasm, as for a life that passes away, with its gentle costumes and its graceful speech, limpid in the varied light of every day, circulates on the squares scattered with children and on the streets where wives meet stopping to chat, it shines among the bigherinaie and among the olive trees of its very elegant paintings from Settignano: All'arcolaio; Bigherinaie in Settignano; Among the olive trees in Settignano; Contrada of Settignano; Settignano square. It is not only the free and perfect measure of the intonation, or the harmonious agility of the figurative discourse, nor only the idyllic and local trend, which will understand us with wonder, in front of this kind of pictorial songbook but, together with all these things , also the syntactic rigor of the context, the order of its development, its modern summarizing classicism, which is composed in it in the manner of an ideal figuration ». (Enrico Somare, cited work). After having reached the maximum splendor of the luminous chiaroscuro melted in the open air, as in the Portoferraio works; Pian Castagnaio and the aforementioned Piazzetta di Settignano, «had to - as Somare clearly points out in his affectionate judgment - in the last artistic season of his life, also learn the color of serenity with feeling, reaching the clarity of a range without contrasts. This is the final epoch that can be called Signorinian Impressionism, and more of a Signori-Nian than Impressionistic ». They are from this last period: Memories of Rio Maggiore; Marina at dawn; Boy at the navy; Girl at the navy; Figure of a sailor; Rain on the terrace; Children caught in sleep; Garden in Gareggi; Terrace in Riomaggiore. Other works by him are: Pioggia d'estate and Una Via di Ravenna, located with the aforementioned Ghetto of Florence in the Gallery of Modern Art in Rome; Windy day, in the Civic Museum of Turin; Landscape and Weaver, in the Gallery of Modern Art in Milan; Bivacco, in the collection of the Artists and Patriotic Society of Milan; Sunday in London, in that of Donna Giulia Crespi-Morbio; Carbonai, owned by prof. Mario Nelli of Florence; The shopkeeper of La Spezia; The return from the capital; Fish market in Lerici; Spring; Lady at the piano; The room of the agitate, in the International Gallery of Modern Art in Venice; Forward with arms; At the drinking trough; Winter around Florence; November; Win; Two ladies; Ponte a Mensola near Florence; Old Bridge; Leith, in the Gallery of Modern Art in Florence; Walter Scott Monument (Edinburgh); High Street (Edinburgh); Women on the road to Settignano; Grandmother; The criminal bathroom of Portoferraio; The old market of Florence; The "toilet" in the morning; The Vigo bridge in Chioggia, his last painting, gray and sad, remained unfinished. 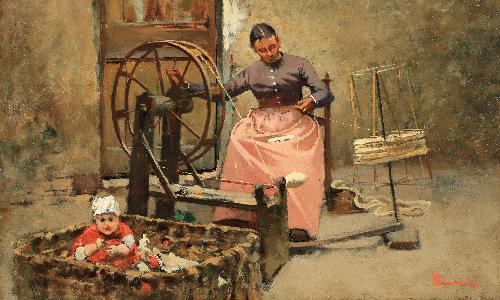