Born in Ravenna on March 15, 1892, died in Chiavari on September 19, 1961. He soon became interested in art, being the grandfather, the father, the uncles of the wall decorators. In 1904 he moved to Milan, where, after two years of high school studies, he devoted himself to painting, helping his father for some time and then attending courses at the Brera Academy until 1914. He fought in the 1915-1918 war; after this period its presentation at art exhibitions and events began; among the exhibitions in which he obtained awards we mention: the Barcelona International, 1929; that of Budapest, 1936; the Carnegie Institute Exhibition in Pittsburg, 1936; the Paris World Exhibition, 1937; the II and III Rome Quadrennial; the XXIII Venice Biennale (in 1942, receiving the Grand Prix for painting); the exhibition La Bella Italiana, in Milan, in 1952; the Marzotto Prize, in 1955 and 1956; the Garzanti Prize in 1957; the Milan City Council Award in 1959; the gold medal in Florence, at the Fiorino Prize, in 1961; the XXII Biennial of Art at the Permanente in Milan, in 1961, the Bagutta-Vergani prize. He was one of the initiators of the "Bottega di Poesia" group; he was one of the founders of the exhibitions of the Italian twentieth century and was part of the group «Seven modern painters», at the Galleria Milano, with Carrà, Sironi, Tosi, Bernasconi, Funi and Piero Marussig. He was an honorary member of the Brera Academy; in 1936 the Wiener Secession appointed him its corresponding member; from 1933 to 1936 he was a member of the Superior Council for Anti ¬ Chities and Fine Arts; he was awarded two honors abroad. He cultivated oil painting, engraving, fresco, mosaic. His works are housed in numerous private collections, in some churches, in the Modern Art Galleries of Rome, Milan, Florence, Genoa, Turin, Verona, Ravenna, in the Museums of Cleveland (U.S.A.), Montevideo, San Paolo del Brasile, Moscow. , Warsaw, Riga, at the Jeu de Paume in Paris, Zurich, Berlin, Munich. After his death, a commemorative exhibition was dedicated to him in Milan, in 1964, at the Palazzo della Permanente; in 1967, in Milan, at the Gian Ferrari Gallery; again at Gian Ferrari, in 1969, for the tempera; in 1970, at La Panchetta di Bari; in 1971, again in Milan, at the Cortina Gallery, for his graphic works. A posthumous exhibition was also organized by the Chiavari Tourist Office in 1972 at Palazzo Torriglia, with a selection of pictorial and graphic works. 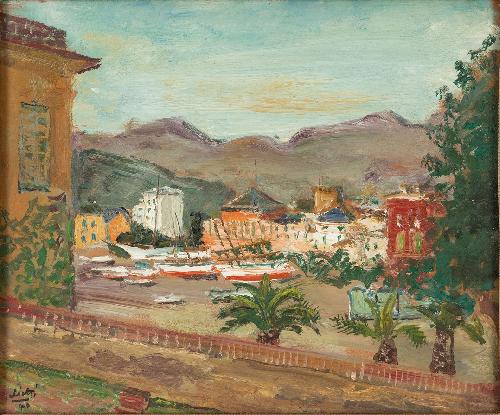