Born in Livorno on January 15, 1851, died in Florence on October 4, 1933. After a short period of lessons at the school of Carlo Markò, he devoted himself to painting from life, fortifying himself under the guidance of the Lega, Signorini and Fattori. His works, of various kinds, retain an imprint of lively originality which aroused, at the exhibitions of the time, bitter criticism and enthusiastic praise. The true copies made with a wide interpretation are, Guido Menasci affirmed, "as many stanzas of the quiet country poem that takes place among the Tuscan hills". The technique is good, the drawing and the perspective are good, the colors are harmonious although a little uniform. Works by him: Monte Acuto, exhibited in Florence in 1877; After the frost, which exhibited in Turin in 1880 raised, for the novelty of the subject, censorship and admiration; The whistle of steam, exhibited in Turin in 1884 and currently in the Gallery of Modern Art in Rome; In the park; After sunset; A cold day in Florence; March snow; The olive harvest; Maremma provincial road; Open book; The hot hours; Sunbath; A street of Cutigliano; Grain screening in the mountains; Beautiful shore on the Arno; On the farmyard; Scaffaiolo Lake; On dusk; Ponte a Greve; Return from the market; Antigna-no; Robin hunting; The Cornia; Hunting for mallards; Genoese provincial road; The source; The exit from the Mass; Last rays; 18th century architecture; Midday in June; After a day of libeccio; then: Il canto della sfoglia e Paese Toscana, exhibited in Venice, at the First Biennale; Winter sunset; Prime note and In the sheepfold, presented in 1897 at the following exhibition; Self-portrait, exhibited there in 1899; Ladder; Anitra and Strada (pastels), exhibited in 1907; Closed for sheep, owned by Felice Baragiola (Orsenigo); Figure, in the collection of Mr. Pietro Ruffini of Milan; two Landscapes and Laundresses, in the Galleria d'Arte Moderna in Milan; Rest of lumberjacks; Autumn sun; Buggiano Alto and Vele adriatiche, who appeared in the Florentine Spring in 1922. 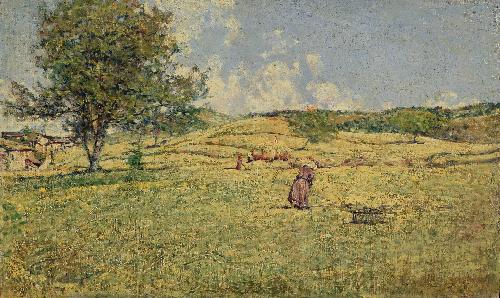