Born in Genoa in 1885, died in Milan in 1945. After studying for three years l ?? Accademia di Brera in Milan, he devoted himself mainly to landscape painting. He exhibited at the Society Promotion of Fine Arts in Genoa and, since 1916, in many national and international exhibitions (London, Paris, etc.). In 1913, one of his paintings, presented at the exhibition ?? Famiglia Artistica Milanese in the forty years of its founding, was purchased by King d ?? Italy. Skilled etcher, from 1914 performs this technique port and city views from various parts of Italy ?? that give him some notoriety. In 1915 he is honorary member of the Academy of Brera ??. In 1922 presents all ?? Exposure Spring Fiorentina works ?? The church of San Biagio in Friuli ?? and ?? Life in the port of Genoa ??. Later, reaches Tokyo where some of his etchings are acquired for the Imperial Museum of that city. Over the 30 years of the twentieth century ?? paints again in Genoa and, later, in Chile, where he worked for a long and fruitful period until his death in Valparaiso in 1952. His works are held in important public and private collections, in Italy (for example, the permanent collection of the Banca Intesa San Paolo) and all ?? abroad. 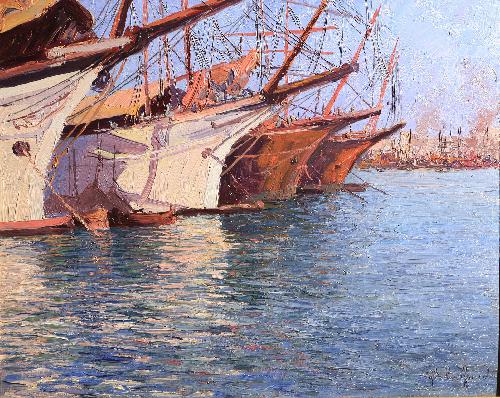