Born in Florence in 1830, died in the same city November 19, 1919. He is a student of Joseph Bezzuoli and Enrico Pollastrini all ?? Accademia di Belle Arti in Florence. He debuted at the Promoter of that city with the historical-literary reasons: Christopher Columbus to Rabida 1853 and Michelangelo who watches his servant Urbino during his illness in 1855, reintroduced in 1858 with Cimabue sees Giotto. He is a regular visitor of Michelangelo's Coffee with friends macchiaioli Vito D ?? Ancona, brothers and Happy Serafino De Tivoli, Lorenzo Gelati, Francesco Saverio Altamura, Giovanni Mochi, Ferdinando Buonamici, Stefano and Alessandro Ussi Lanfredini. After taking part as a volunteer in 1859, the War of Independence ??, converts the picture of ancient history to that of contemporary history, earning the second prize for the theme ?? Episodes Military ?? the Competition Ricasoli with The Marquis Fadini saves the life of General De Sonnaz in Montebello, now preserved at the Gallery of Modern Art in Florence ??. In May 1861 he went to Paris with Michele Gordigiani, Stefano Ussi, Giovanni Mochi, Antonio Fontanesi and Nino Costa, and here he meets friends Florentine Signorini, Vincenzo Cabianca and Cristiano Banti. He returned to Florence in the same year, presents some works at the First National Exhibition, the biblical subjects attempted by Susanna and the Elders Agar banished from Abraham, The Marquis Fadini volunteer in the cavalry and Galileo Galilei before the Court of Inquisition ??, getting a medal that refuses along with twelve other artists in protest against the jury considered biased and unfit. Promoters of the 1862 and 1863 presents the first works inspired by the painting's true: the two paintings titled Roman Costume, Two peasant girls of the Roman countryside and country scene. During stays in Castiglioncello, documented since 1863, at the estate of ?? friend Diego Martelli, makes contact with Odoardo Borrani, Giovanni Fattori, Giuseppe Abbati and Raffaello Sernesi, painting with them countryside scenes and marine: View of the countryside Hammers , Marina Castiglioncello, Cottages in Castiglioncello, Castiglioncello and Renaioli After the storm (about 1865), this latest in the Galleria ?? d ?? Modern Art in Genoa. In Florence, in about ?? winter 1865-1866, is portrayed by Giovanni Boldini in the house of Diego Martelli (Milan, private collection, already collection of Arturo Toscanini). In 1866, together with Raffaello Sernesi, Giuseppe Abbati, Eugenio Cecconi, Wimpy Pisani and Gustavo Uzielli, he volunteered for the Third War of Independence ?? and was taken prisoner in Bezzecca. To return to Florence is dedicated to delicious scenes of country life - Olive harvest near Florence (1868) and gift for the boss (1869) ?? alongside those gender acclimatized in the Roman countryside and in domestic interiors that meet the taste of the public and are also displayed and sold to foreign ?? (in 1879 he exhibited in Suffolk Street in London). Among these works are reported Piper (1881), The soap bubble (1886), The lesson of braid (1888) and kidding with the ball (1888). In 1870 he was appointed professor of the Academic Council of Fine Arts in Florence, a position he held until his death on November 19, 1919 in Florence. 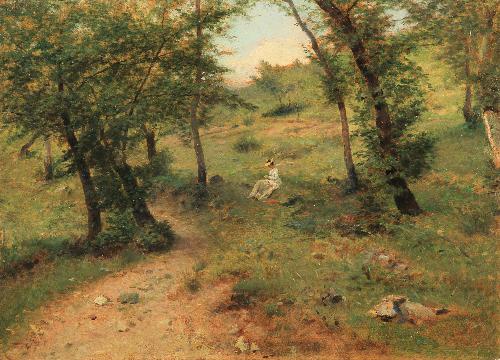