Born in Rome on November 14, 1852, died there on December 28, 1930. Revealing himself early, his father, also at the exhortation of his acquaintances, sent him, just twelve, to Naples to study in that Institute of Fine Arts where Filippo Palizzi and Domenico taught. Morelli. He stayed in Naples for nine years, from 1864 to 1873, and worked with Dalbono, De Nittis, Cammarano and Michetti. Mariano Fortuny became interested in the young painter when he learned from Domenico Morelli that a picture exhibited by a Neapolitan antiquarian was the work of Mancini, who at the time lived with Gemito and painted genre subjects in some of which was influenced by the art of Gioacchino Toma and Morelli. Among them we remember: Reading; The vote; Inspiration; The violinist; After the duel; The schoolboy; The prevetariello, in the San Martino Museum in Naples. In 1872, at the Paris Salon, he exhibited two works, then he went to Venice to study the sixteenth century masters. In 1875 he went for the first time to Paris where he met the major Impressionists and where he worked for the merchant Goupil. About a year later he returned to Naples, but in 1877 he was back in Paris with Gemito, working on behalf of the Dutch landscape architect Mesdag, remaining in France until 1879. But that life did not suit him, causing him nervous disorders. He wanted to return to Naples to restore himself in a nursing home. He stayed there for four years and gradually began to paint again. It cannot be said that his mind suffered a real state of imbalance; rather, he lived absorbed in a kind of contemplative enchantment which manifested itself in the constant fever of work. Healed and rested, he left for Paris and London. In 1883 he settled permanently in Rome. Few, however, understood his capricious and exuberant art that induced him to add to his palette, already frenzied with glowing hues, gold or silver foils, pieces of glass, of fabrics, with which he obtained admirable effects when viewed from a distance. In his last activity, he moderated the excesses, reaching from hand to hand a greater composure and an ever sharper balance. In 1887 he was in Venice, in 1901 in London, in Dublin, in the Netherlands, in 1909 and 1910 he was in Germany with the collector Messinger whom he had met in 1907. A moderate well-being reigned in his house, his fame grew by day in day, and the satisfactions and triumphs culminated with the appointment as Academician of Italy (May 20, 1929). But he did not know adaptations to the fashions and manners of the time; he did not know how to trade and sell his paintings. His works cannot be truly cataloged both because they are very numerous and because they are scattered in Italian and foreign collections. In about half a century of activity, the main exhibitions of his time have had Mancini in mind: to the Internazionali di Venezia he sent paintings from the year of its foundation to the last of his life. Some of the best known works are: Portrait of the father and Portrait of Mrs. Pantaleoni, in the Gallery of Modern Art in Rome; Figure of a girl and Landscapes in the Turri collection in Milan; Lydia; Figure study; Female nude; Half-naked female figure; Marina di Minori, in that of Milan; Romper and Nude, in the «Paolo e Adele Giannoni» Gallery in Novara; Mandolinata and La venditrice, in the Beretta collection in Milan; The model, in that of Baron Chiarandà in Naples; The miller's daughter; National Villa of Naples and Posillipo Sea, in the Gualtieri Art Gallery in Naples; The Marquis del Grillo in the Municipal Gallery of Modern Art in Dublin; Child reading in the Tallone collection in Milan; the Greek Theater of Taormina in the R.D.G. from Milan; The man with mandòla in the Rosazza collection in Milan; The duel in the Galleria d'Arte Moderna in Turin; The boiler maker; Bandit; Madonnina; Young Turkish prisoner; Portrait of Tina Du Chène; Toilet; Portrait of Mr. Otto Messinger; Ciociaretta; The straw hat; Shepherdess; The street urchin; Geltrude; Toasts; Player; Rococo costume; The lover; The Musketeer; The artist's mother; a numerous series of self-portraits, with the typical smile, mostly owned by private collectors. At the VI Quadriennale Romana (1952) he was included in the Italian Painting Section of the second half of the nineteenth century, with three works. Pupils of him were: R. Bracco di Chiosi, U. Coromaldi, Vincenzo De Simone, G. Trussardi Volpi. 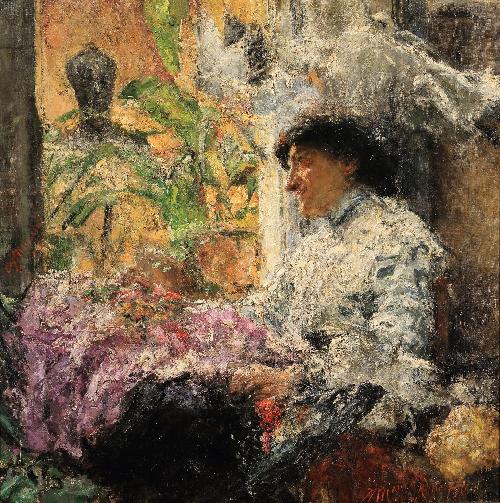