Born in Tocco di Casauria on 2 October 1851, died in Francavilla a Mare on 5 March 1929. Supported by the Municipality of Chieti, he enrolled, in 1868, at the Institute of Fine Arts in Naples, a disciple of Filippo Palizzi and Domenico Morelli and meeting also with Fortuny in 1874. He soon moved away from these teachings, to assert himself in an absolutely original art. The Corpus Domini procession, exhibited at the "Salvator Rosa" promoter of Naples in 1877, suddenly gave him fame. He later painted: Twilight; Countryside with herds; Spring of Love, exhibited in Paris in 1878: L'ottava; Impressions on the Adriatic; Palm Sunday; Pescatori di telline and Morticelli, exhibited in Turin in 1880; Tempera studies, consisting of thirty-four subjects, exhibited in the Palazzo del Senato in Milan, in 1881; Il voto, exhibited in Rome in 1883 (considered his masterpiece) and currently in that Gallery of Modern Art, where Pastorella is also kept. He gave the greatest battle to what remained of old in modern painting, making use, in a certain way, of an impressionist technique, using thickness of color and freshness of brushstroke, with which he obtained powerful effects of relief, light and color. . These are the years in which he befriended the young Gabriele D'Annunzio, from whose works he drew inspiration for one of his most famous paintings, The daughter of Jorio, now fortunately returned to Italy and awarded at the Venice Biennale of 1895 the work was in the Ingegnoli collection in Milan). Previously he had exhibited in Venice (1887), in Rome (1893), in Antwerp (1894). In 1889 he exhibited about two hundred works at the III Venice Biennale and about one hundred in Berlin. Shortly after 1885, due to disturbances to the intellectual faculties, he moved away from painting; it was only in 1911 that he recovered and took part in the Venice Biennale. At the VI Roman Quadrennial (1952) a commemorative was set up with many works by him. The official catalog carried a moving biography of Alfredo Schettini. Other works by him: Head of a young woman, in the Turri collection in Milan; The crippled and the snakes, exhibited in Paris in 1900; The shepherds; Midday rest; Little daughter; The sleep of innocence; The sick cow; Head of a man (pastel); Head of a Woman (pastel) and Adriatic Sea, all four preserved in the Gallery of Modern Art in Milan; Il Morticino (replica of the Morticelli family), in the «Ricci Oddi» Modern Art Gallery in Piacenza; Self-portrait; Study for the vote; Head of a curly child; Kneeling women; Mother with bare breasts and Interno di bosco, all six of which are owned by Micozzi di Roma; The return from the pasture and Pastorella, in the Chiarandà collection in Naples; Procession of children, in that Falk; Self-portrait, owned by Valentini; Contadinella, in the G. Rossi collection; The joy of living, which was in the scattered Trossi-Uberti collection; Waiting for the spouses, in the Rossello in Milan. He was also an excellent portrait painter. He cultivated etching with very fine taste. He was the teacher of A. Ferraguti, G. Carino; influenced by his art were also his brother Quintilio, Camillo Innocenti, Vincenzo Irolli and Tito Pelliccioni. 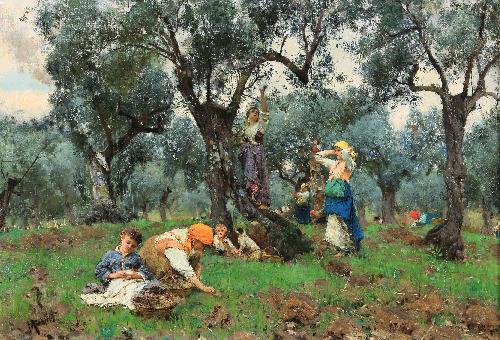