Born in Polla, in the province of Salerno, Edoardo Monteforte entered the Institute of Fine Arts in Naples in 1862 and studied with Achille Carillo and Gabriele Smargiassi, painting bright landscapes and seascapes. During his pupil he earned several prizes and made his debut in 1870, at the Promoter of Naples with the painting Cavalli in Pastura. He was a highly regarded painter who mainly dealt with the landscape and the seascapes. He painted in both oil and watercolor, and was very prolific. He was particularly appreciated by the foreign public (a large part of his production was bought by French and English merchants) who loved in him the tonal language and the chromatic plasticity of the great Neapolitan landscape school. According to the new trend of social realism, spread in the South and in the rest of Italy starting from 1880, the work of Monteforte, who had dedicated himself to landscape painting of Posillipian matrix and then resinista, does not qualify for the will to propose, with the subjects treated, a social denunciation but rather aims at experimenting with a new artistic language. The painter moves precisely in the wake of contemporary realist painting on a theme dear to the Neapolitan painters of the nineteenth century and used by other authors, including Palizzi, Ricciardi, Pratella and in particular by Michele Cammarano, towards whom, for solidity of system, atmospheric breath and by scenographic choice, Monteforte seems to have more closely related. In 1877 in Naples he exhibited: A Sunday in October towards Pompeii; and two watercolors entitled: On the beach and Winter. In 1881 in Milan he exhibited Parco Spinelli, The return from fishing and The return from Sorrento. At the 1883 exhibition in Milan, he exhibited the fresco of Vento, Marina Sorrentina and Costa Sorrentina. In 1884 in Turin he exhibited The return from fishing, Monte Scutari and Mattinata pel bosco. After a trip to Egypt, he painted a number of Orientalist subjects, including A Evening for the Upper Nile, Tomb of the Caliph in Cairo, exhibited in 1898 in Turin. Until the last years of his life he taught drawing and painting at the “Suor Orsola Benincasa” Higher School of Female Teaching. He died in Naples in 1933. 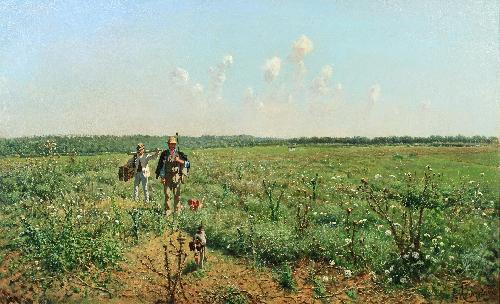