Born in Laigueglia on 17 September 1835, died there on 11 October 1883. Son of Giuseppe. He was a pupil of Giuseppe Isola at the Ligustica Academy where he later became a teacher. He also attended the "Costume Evening School". He painted biblical pictures, and genre pictures conducted with a modern pictorial sense, in which the influences of the so-called Lombard painters of the "Scapigliatura" could already be felt. He exhibited in Rome and Naples, and continuously at the Promoter of Genoa from 1864 to 1882. Some of his works were purchased by King Vittorio Emanuele II, by King Umberto I, from the Municipality of Genoa; others are found with the son Avv. Benedetto in Genoa and with his nephews Giuseppe and Edoardo in Laigueglia. Some are mentioned: Hagar's repudiation; Sunset; Shepherdess of Brig, property of the princess of the Cisterna; Idyll, owned by Avv. Bands; Stormy sea; Lucky Hunt; Imprisonment; Mouth of the Merula Stream (Andora); Ecce Homo; Samaritana al pozzo (sketch): the latter three owned by Mr. G. M. Remondini of Genoa; Pilgrim Swallow; Honeymoon; Night landscape; Woman with fan; Man in felucca reading; Still life: all, studies or sketches, belonging to the lawyer. Benedetto Musso, son of the artist. 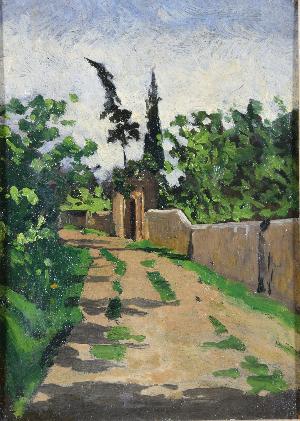