Born in Livorno on August 6, 1866, alive. A pupil of Natale Belli, then of Giovanni Fattori at the Fiorentina Academy, he was first among the tastiest macchiaiuoli, as can be seen in Young Tuscan Peasant, his first work, exhibited at the Promotrice in Florence. "Then he turned to a kind of decorative painting, bringing an unusual strength and animating it with the resources of his rich palette, which favors and accentuates red, yellow and blue tones" (A. Lancellotti). Exuberance of tonality and movement of shapes on perpetually sunny backgrounds. Apart from the critical evaluations around his painting, evaluations which they intend to subtly emphasize the vivacity of his palette and the violence of color - Nomellini is an unmistakable painter. He has an acute temperament and a very rich vein that often lavishes with overwhelming abundance: he interprets his world with typical frankness, far from schools, from influences, from aesthetic postulates. As he progressed in technique, he wanted to preserve the characteristic youthful momentum of his art. Not closed in form, he feels and loves the researches of new painters, and many of them, among the most daring and innovative, are keen to affirm that they have learned more than one secret of art from Nomellini. and they love him as a teacher. Arouse of energies, clear and imaginative writer, friend of the greatest men of our time such as Pascoli, D'Annunzio, Puccini, he is one of the most significant and best known figures among the painters of the elderly generation. Very active, he does not miss any of the most important exhibitions. His fame is widespread in Italy and abroad. One of his most representative paintings has recently been placed in the great Usuka Museum in Tokyo: Wandering Hawks. Among the numerous paintings by him are: An olive grove and Portrait, exhibited in Florence in 1886; L'incontro and Pian di Tombolo, also in Florence, the following year; The hay; Nina von Zandt; The castaway, exhibited in Florence in 1891. Then, sent to Venice: The symphony of the moon, currently in the Galleria d'Arte Moderna in Venice, and Le lucciole (1899); The treasures of the sea, in the Gallery of Modern Art in Rome with the Camajore Fair. Other works: Autumn in Tuscany, diptych (1901); Victorious Youth and The Song of the Nightingale (1903); Dithyramb; Horde; The Furies (1905); Souls and leaves; Garibaldi; The Palio of Siena (1907); New people; The yard (1909); Afternoon of a Lombard September; Sun on the frost; The beautiful; The fable (1910); Midday and Autumn in Venice (1912); Portrait of Mrs. Fosca Leonardi (1914); Country Tavern and Return to the Homeland, presented with 41 other paintings in an individual exhibition in 1920; Unknown soldier (1922); Incipit nova aetas (1924); Wave murmur; Primrose; Odysseus (1926); three paintings inspired by Elba in 1928; The Fascist Revolution; Pastures on the sea (1930); The departure from Quarto; The salute to the flag; Garibaldi in Naples; First readings, the latter in the Galleria d'Arte Moderna in Milan. 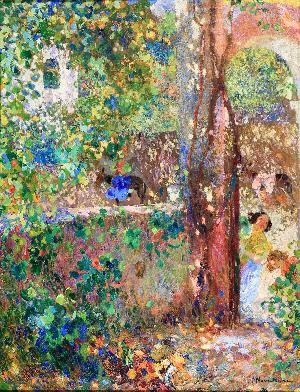