Born in Pusina, near Venice, on December 8, 1850, died in Venice on October 17, 1918. At the age of twelve, he began by historizing the walls of his father's house in Sacile with the facts of the Old Testament. In 1865 he entered the Academy of Venice, and was initiated by Pompeo Molmenti in that art in which a few years later he was to be greeted as master. In 1871 he appeared in the artistic arena, at the exhibition of the final essays of the Academy, with a Portrait and two small pictures: The Golden Staircase of the Doge's Palace and II Choir of the Frari church, praised by Camillo Boito in the "Nuova Antologia" for "the admirable and vigorous representative evidence". Greedy for air, sunshine, new life, the artist immediately freed himself from academic formulas and devoted himself, with an enthusiastic and conscious soul, to the study of nature and truth. His field of action was Polcenigo, where in 1872-1873 he painted Sorgente del Goreago; Return from the fields and Towards evening. He reproduced this last work in larger dimensions and titled Su l'Avemaria a Coltura, a painting that was purchased by Queen Margherita. In 1876 he painted First Steps, located in the Gallery of Modern Art in Venice; in 1878 he exhibited in Milan II Sacristan and Roman, the best of his landscapes. After the morning of the festival and II molinetto, he increased his notoriety even more, who achieved fame with La morte del pulcino (1881) and with Refugium peccatorum (1882). The first of these paintings is in the Gallery of Modern Art in Venice - a replica can be found in the collection of comm. Lorenzo Delleani of Carignano -; the second, exhibited in Rome in 1883, was purchased by King Umberto who donated it to the Gallery of Modern Art in Rome. Immediately afterwards he performed Vice Mum, which pairs well with First Steps. At the National Exhibition held in Venice in 1887 he presented two large paintings: Ruth, found in a gallery in Buenos Aires, and Retini da festa, in a Berlin museum. The following year he participated with the fruit seller at the Bologna Exposition, and the painting was purchased for the Munich Picture Gallery. The Ave Maria, executed in 1893, and judged by some to be superior to Refugium peccatorum, which is also the artist's best-known painting, was purchased for the Revoltella Museum in Trieste, where it is still found today. Still in Polcenigo, where he had found his first inspirations, in 1896 he painted / funeral of a child, which was bought by the Tsar of Russia and placed in the Alexander III Museum in Leningrad. At the International Exhibitions in Venice he presented: in 1903 Abbandonati, purchased by Queen Margherita and donated to the Gallery of Modern Art in Venice; in 1905, the Saturday rosary; in 1907: The curate's cottage; Sant'Anna d'Asolo; Sunday morning; in 1909 two tempera colors: Prima rain, purchased for the Luxembourg Museum in Paris, and Golden Wedding, belonging to the Venice City Hall, which placed it in the Wedding Hall; the following year, Mattino; in 1912: Outdoors; November 1st and Beata solitudo, the latter two inspired by Franciscan motifs; in 1914, Portrait and The Dear Name, last painting, true swan song by the noble artist, with whom he closed an exemplary career. Other works by him: Pax, purchased by the King and now in the Pinacoteca of Ascoli Piceno; In limine vitae, which is found in Budapest; The raft, in the collection of comm. Delleani of Carignano; The fanfare of the grenadiers, belonging to Eng. Mario Nono; Feltre, which can be found in the Gallery of Modern Art in Rome; The collection of leaves, in that of Milan; Mattutino, owned by the cav. Giovanni Bianchi of Milan; Fall; The brat; The poor mother; The hearth; Prayer in the church; Convalescence; Lovers; Walk to Chioggia; Evening prayer. 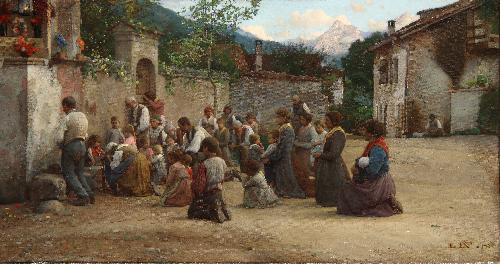