Born in Rome in 1890. First he was a pupil of C. A. Enrico Simonetti, then he attended the Academy of the Capital. He treats the portrait by preference, but in his production there are also numerous landscapes, such as: Glicine in flore; Spring morning; Spring in Liguria; Sunset on the Gulf of Genoa; Storm; Gulf of Camogli; Miraggio, which emerged, with The Red Boat and Portrait of Mrs. X, in a solo show recently held by the artist in Genoa. He exhibited in Milan at the Permanente in 1917, then repeatedly in Paris and in Turin and Genoa. His works are still cited: Children in the sun; Fishing women at work; Bather; Small fishermen; The arcades of Camogli; Gulf of the Genoese; Pines by the sea; Fisherman repairing the nets; Seafood fishermen; After the bath; Punta della Chiappa; San Fruttuoso; Fishermen's houses in San Fruttuoso. 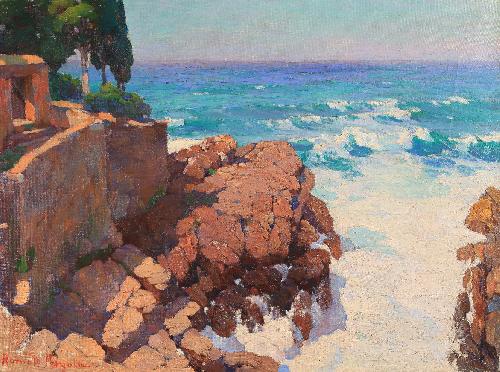