Antonio Schiaffino was a pupil of Viazzi and T. Quinzio at the Ligustica Academy of Fine Arts and later attended the studio of Giuseppe Pennasilico. He went to Rome after winning the “Marchese Durazzo” five-year artistic pension, opening a studio starting from around 1911, so he had contact with the painter Pietro Gaudenzi. It was precisely the artistic experience he lived in Rome that distanced him from a nineteenth-century painting. He began his participation in the Genoese Promoter in 1900. In 1913 Antonio Schiaffino was appointed Academic of Merit at the Ligustica. He participated in the Brera exhibition in 1907 with the painting "The abandoned". In 1921 he exhibited at the first Roman Biennale of Art and in 1926 at the first Marine Art Exhibition. Antonio Schiaffino set up a personal exhibition at the Circolo della Stampa of Genoa in 1930. From 1929 to 1941 he was regularly present at the exhibitions of the Fine Arts union of Liguria. In 1933 he exhibited with Vittorio Nattino at Palazzo Rosso. Schiaffino painted seascapes, landscapes, figures and still lifes; he also acquired a certain notoriety as a portraitist. From Pennasilico he learned the use of pictorial matter and color, arriving at a painting with a romantic taste, reminiscent of French post-impressionism. The San Giorgio Art Gallery in Genoa dedicated a posthumous exhibition (over one hundred works) to him in 1973. Works by him at the Nervi Gallery of Modern Art in Genoa ("In the sun", "Ligurian beach"), the Gallery of Modern Art in Rome ("Children among the poppies"), the Gallery of Modern Art in Milan . 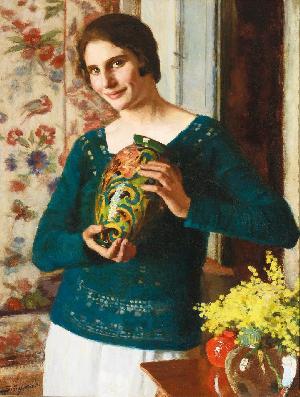