Born in Codogno on 13 December 1861, died in Azzano di Mezzegra (Como) on 12 April 1944. After studying landscape painting en plein air in Verona, in 1878 he settled in Milan, where he had the painter Giuseppe Bertini as a teacher at the Brera Academy. With the painting Il coro di S. Vittore he appears for the first time in the Milan Exposition of 1883 and in these years he begins to take inspiration from the countryside around Codogno. He soon established himself as a landscape painter, approaching the research of Lombard naturalism (Bianchi and Carcano, but also Delleani, Gignous and Ciardi) specializing in the execution of marinas, taken from life during summer stays in Sturla, Noli and Forte dei Marmi, but characterized by poetic and evocative atmospheres that perhaps derive from the study of Venetian lyric landscape. He participated in the Venice Biennale from 1887 to 1932 (in 1914 with a personal exhibition of thirty-two works) and was also present at various Triennials in Milan, at the Parisian Exposition of 1900, in Munich and Vienna, where he was awarded a medal of gold. In 1914 he sets up a personal room at the Venice Biennale with thirty-two works and, in 1916, a major exhibition is dedicated to him in the Pesaro Gallery in Milan. In 1920 he received the Principe Umberto prize with the painting 7 our children. Among his best known works, preserved in Italy and abroad, we remember: Pesci (1884); Bad business (1885), The sun and the wind come back (1887) and Fine serena (1913, Rome, Galleria d'Arte Moderna); Marascari and Sopra i monti di Erbesio (1889); Pisces and the serene is back (1890); Mare in Sampierdarena (1895); Threatening libeccio; Sad time (1887); Portrait of my wife (1898); Beech forest (1900); Dying autumn; Cosa bella e mortai passes and does not last (1906); September in Liguria; Life in the port (1909); Vivid beach (1920); Towards the sunset (1926); The night is approaching (1929). His paintings by him are kept, as well as in private collections, at the Modern Art Gallery in Milan (Visions of Peace, 1907, with which he obtained a gold medal from the Ministry of Education; Poetry, 1892); at the Revoltella Museum in Trieste (Serene Sunset, 1895); at the Brooklyn Museum, New York (Spring Shower, 1894); at the Gallery of Modern Art in Florence (Twilight in the park, 1914); at the Gallery of Modern Art in Venice (Vecchi plane trees, 1914); at the Civic Museum of Turin (Symphony 1892; Last warmth, 1907). 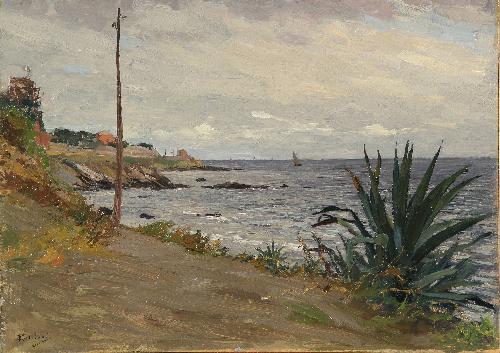