Born in Milan on May 10, 1814, died there September 10, 1886. Piglio of Michael. Took up the study of art under the guidance of his father and uncle. His first works date back to 1828. He specialized in painting perspective, which became famous. Held the chair of perspective in the Academy of Brera and later he was appointed president, held the office until his death. Its exterior and interior of the church was purchased by the courts and galleries across Europe. The exhibition of 1837 he obtained a great success, and critics unanimously proclaimed the continuation of the art of mile post. He was one of the artists responsible for conducting watercolors and drawings for the album offered to Queen Victoria of England Emperor of Austria. The Society of Artists of Vienna exhibition of 1841, bought the painting the interior of the Basilica di San Marco. In the same year performed three scenes for Lord Clifford of London, and in later years he worked for museums, galleries and Courts of Austria, England, France, Russia and Poland. Carried out his art for the House of Savoy. His painting of the interior of the Cathedral of Bong Bron en en Bresse he was repeatedly commissioned. In the collection are found in Milan Berretta 117 of his works, including: Interior of the Cathedral; Court of the Archbishop; Interior of the Abbey of Clairvaux; Chorus of the Monastero Maggiore. The Museum of Turin: Interior of Milan Cathedral; Atrium of Sant'Ambrogio and an interior of the church. His other works are in the comm. Carminati, Count Negroni, in the palace at Monforte and many Milanese families. 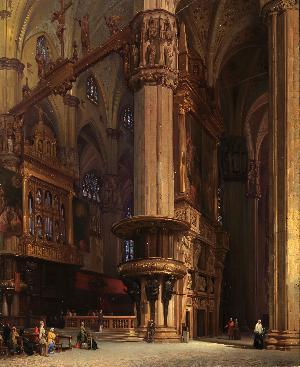