Born in Florence on October 29, 1846, died in the same city on January 19, 1906. After completing the courses at the Academy, where Pollastrini and Marubini taught, he then attended, for a short time, the school of the nude of Antonio Ciseri. Retired to San Gimignano for health reasons, he devoted himself to the study of nature from life, and to the composition of rural paintings, of a truth and evidence that filled his canvases with light. In fact, after the first rather cold works (The girlfriend of 1870; Maternal joy of 1881), with a purist approach (Return from the fields), he came into contact with the Macchiaioli movement and, above all, with Fattori and Signorini. At first he preferred the genre painting (Electric wire exhibited in Florence in 1872; Cleric violinist; First assault in 1879), then he devoted himself to the landscape, becoming one of the best landscape painters of his time in the Tuscan school. He exhibited: in Paris in 1878, Quiet Life; at the Royal Academy of London in 1883, Return from the party; in Turin in 1884, The sowing of wheat, currently in the Gallery of Modern Art in Rome; in Venice in 1887, The rogations and a quiet life; and to the Promoter of Florence in 1888, The blessing of the fields. Among the numerous works by him we note: Contadinella sul prato; Morning in Bocca d'Arno; Olive harvest; Spring morning; Ave Maria; Plowing; Pasture; At sunrise; Towards the fold; The gramignaie at the river; The San Gimignano fair; In Montemiccioli; Thirst in the fields; Marina of Pisa; Bocca d'Arno scales; Noon; Charcoal after the rain; The divine shepherdess; The ducks; Gaiety; Tombolo pine forest. Cannicci lived a modest life which gave him little satisfaction. One of his pupils was P. Buffa; Angelo Bastianini was also influenced by it. 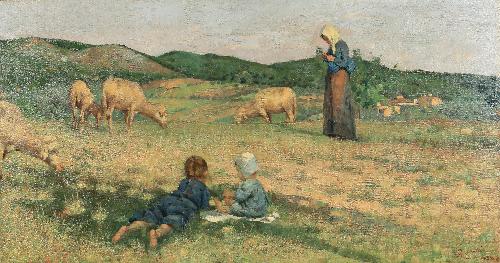