Born in Venice on 18 March 1875 and died in Quinto di Treviso, 14 June 1932. Since 1896 he has attended the landscape courses of his father Guglielmo and those of Ettore Tito at the Academy of Fine Arts in his native city. In 1894, his sixty life studies exhibited at the Castello Sforzesco, made between the ages of fifteen and nineteen, were already received by the public with considerable enthusiasm. In 1899 in Venice he successfully exhibited Monte Rosa and Terra in Fiore, the latter preserved in the Marangoni Museum in Udine. His artistic production is mainly dedicated to lagoon visions and landscapes of the Treviso countryside. He spends his life with his family in the houses of Venice, Canove d 'Asiago and Quinto di Treviso, alternating his activity as a painter with that of a farmer. There are many national and international exhibitions in which he participates and the awards received. He obtained the Fumagalli prize at the Brera exhibition in 1900, the gold medal at the Munich International in 1901 and the silver medal at the San Francisco exhibition in 1904. He continuously participates in the Venetian Biennials and in foreign exhibitions in Vienna, Barcelona and Brussels. Personal exhibitions are dedicated to him in Florence, Milan, Rome, Naples, Trieste and Venice, at the 1912 and 1928 Biennials; finally, a posthumous anthology at the Exhibition of Forty Years in 1935. His works are kept in public and private collections, including: National Gallery of Modern Art in Rome (Saltimbanchi and Vacca bianca), International Gallery of '' Modern Art of Venice (Cows at the drinking trough), Modern Art Gallery of Turin (Mestre), Musée du Luxembourg in Paris (The two cows), Ricci Oddi Modern Art Gallery of Piacenza (White horse, ), Gallery of Modern Art of Florence (Paese, San Giorgio and Sul Limite), Civic Museums of Art and History of Brescia (Lagoon view), collection of the Banca Intesa-San Paolo (The return of the fishermen, Plowing and Marina or Fishing), Gallery of Modern Art of Genoa-Nervi (Goats by the sea), Vasari Corridor of the Uffizi Gallery in Florence (Self-portrait), Revoltella Civic Museum of Trieste (Noon on the plateau). 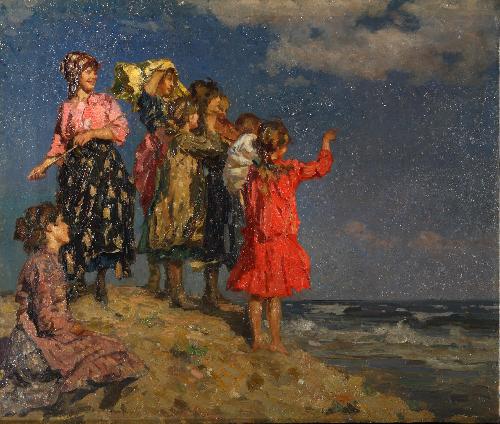