He carried out his first studies in Florence with Fattori, later (from 1898 to 1911) he moved to Lucca and then to Rome, participating in the group "In arte libertas" founded by Nino Costa. In 1900 he took part in the Roman Promoter and in the IV Milan Triennale. From 1903 to 1920 he participated in the Venice International Exposition. After 1902 he joined the Divisionism to which he had already approached through Nomellini (known in Torre del Lago, in the house of Giacomo Puccini); this propensity strengthened even more after meeting the Roman pointillist painter Lionne. After 1910 his painting (also influenced by Nino Costa) tends towards symbolic effects that will characterize his subsequent production. In 1910 he moved permanently to Bonassola, and from the following year he exhibited at the Promotrice Genovese, also participating in the International Exhibition of Fine Arts in Rome, and in the years 1913-1916 in the Roman Secessions. In these years his painting presented two different aspects: full naturalism and symbolism. Academic of merit of Ligustica in 1920 and of San Luca in 1942. His exhibition activity was very extensive: at the Pesaro Gallery from 1920, Venice Biennale 1924, '26, '28, '30; at the Roman Biennale of 1925; Rome Quadrennial of 1935; at Palazzo Rosso in Genoa in 1932. Works by him appear in Arezzo Civic Art Gallery, in the Picture Gallery of the Municipality of Bonassola, in Carrara, Florence, in the Modern Art Gallery of Genoa-Nervi, in Milan, Novara, Turin, Rome, etc. 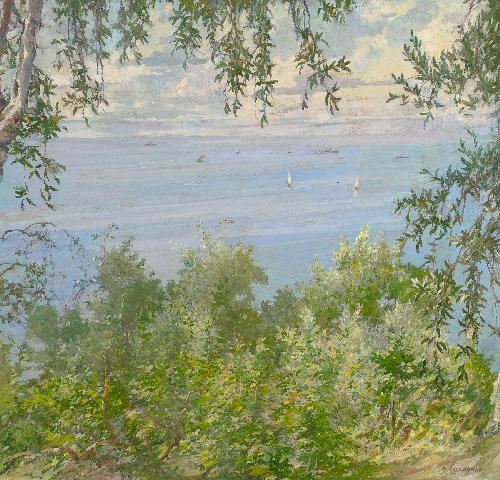 Olive trees on the sea in Bonassola - around 1940 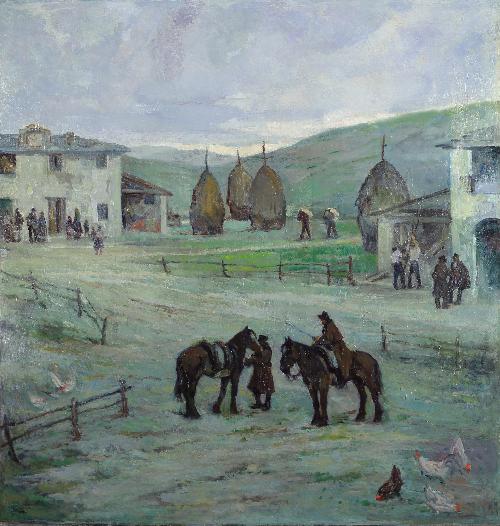