Born in Intra on December 3, 1843, died there on October 29, 1889. The son of a shoemaker, he showed a marked aptitude for drawing since he was a boy. His first teacher was Litta, intrese; then the young man, with a small pension, was able to go first to the Accademia di Brera in Milan, then to the Accademia Albertina in Turin, where he remained until the eighteenth year. In 1863 we find him in Rome, at the Bertini school, and co-disciple of Tranquillo Cremona and Mosè Bianchi. With them, especially with Cremona, and with Filippo Carcano, Giuseppe Grandi, Alfredo Catalani, lived the best years of his existence. From the earliest school years he had attracted the attention of teachers and peers for the singular vigor of the interpretation derived from the ingenious assimilation of the principles proclaimed by Fontanesi. After leaving the Academy, he continued to paint portraits and landscapes, alternating his stay in Intra with that of Milan, where he was the beloved guest of his friend Cremona. In Intra he met, in the family of the Troubetzkoy princes, of whom he was a guest, well-known English personalities who induced him to go to London. But from the English capital, having refused him by the Royal Academy the portraits he had presented to be exhibited, he left, deeply embittered, and, certainly also shaken by the great void that the death of his indivisible friend had left in his life, detects the first signs of that mental imbalance which necessitated his retirement to an asylum. He got out of it sometimes, during the nine years he still outlived himself; but more he did not paint. He remains in the history of art as a great portrait painter, with a soft, broad, lively brushstroke. The commonality of life and ideals with Cremona certainly shines through in Ranzoni's paintings, but not in such a way that one can speak of imitation. Cremona himself had for his friend the deference, the admiration that an artist rarely has for another. It is worth mentioning the epigraph with which Alberto Pisani Dossi summarized and filled with poetry the relations between Ranzoni and Cremona: «The brilliant mirror of his pictorial soul - was illuminated by Tranquillo Cremona. "When that light went down - the vaporous boundaries of his images - merged into the night." Listing Ranzoni's works, almost all portraits, is a long undertaking. Those exhibited at the 1926 Venice International, in the retrospective exhibition organized by Raffaello Giol-11: Portrait of Agostino Rossi, property of the Intrese Historical Society; of Signora Rossi, belonging to the painter Arturo Tosi, who also owns those of Carlo Cacciatori; of the Garibaldi major Erba; and a young girl with a straw hat; then: On Lake Maggiore, in the collection of dr. Amedeo Ca-gnola; Portrait of Mrs. Borra, belonging to the cav. Riccardo Nobili; Portrait of a woman Anna Ponti Greppi; Portrait of Don Gabriele Greppi; Portrait of Donna Maria Greppi, all property of Senator Emanuele Greppi; Portrait of the Unknown, in the collection of comm. Carlo Felice Della Beffa; the Portrait of Princess Ada Troubetzkoy with her son Gigi; of Prince Gigi Troubetzkoy; The mountains of Vaino seen from the villa Ada: all belonging to the prince ing. Troubetzkoy; Portrait of Mrs. Cobianchi, formerly in the collection of the Hon. aw. Giacinto Gallina, to whom also belonged: the Portrait of Mrs. Luvoni, currently of Mrs. Anna Maria Turri-Gallina; The little girl Tonazzi who works; Portrait of a man and the Portrait of Countess Arrivabene, currently kept in the Galleria d'Arte Moderna in Milan, in which there is also a sketch of the head of Giuseppe Rovani. And again: The portrait of Countess Franzosini and Signora Spinelli Ambrosini, belonging to Countess Beatrice Alborghetti; Tranquillo Cremona's sister-in-law; Nude of a woman; The three Troubetzkoy boys in the greenhouse of Villa Ada, formerly in the collection of the Hon. Gussoni; the Portrait of Mr. Ughetti, property of Gustavo Botta; of Mrs. Vghetti, belonging to Mr. Arturo Ziist; Portrait of the Unknown, formerly owned by Camillo Rapetti; Portrait of Mrs. Confalonieri, in the collection of sen. Braids; Portrait of Mrs. Frane-foro, in the collection of sen. Angelo Pavia; Portrait of Rosa Alemanni Ceretti, property of Silvio Biraghi; Ascona, owned by Luigi Florio; Portrait of the Princess of St. Leger, belonging to the same; Portrait of a Lady, property of Mrs. Flora Biraghi Pavesi; The letter, belonging to Mr. Carlo Beltracchini; Portrait of Signora Pisani Dossi, in the collection of Count Emilio Turati; Giovinetta, property of Mr. Pasquale Vercesi; 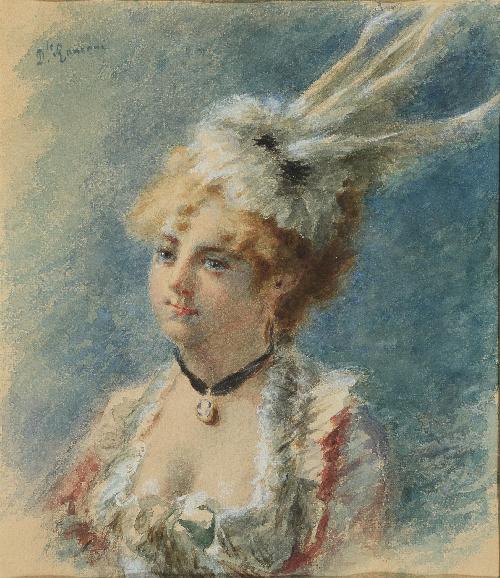