He studied at the Ligustica Academy of Fine Arts in Genoa in 1874, a pupil of Tammar Luxoro and the painter Serafino De Avendano. Starting from 1879 he participated in the Exhibitions of the Genoese Promoter, with various paintings depicting Ligurian landscapes, port views and of Courmayeur, where he stayed in his maturity years. He presented some works at the Colombian Exposition of 1892, obtaining considerable success. Painter with a traditional taste linked to nineteenth-century artistic culture, not immune to post-impressionist references, Costa was part of the "Gruppo di Sfuria" and the "Genoese Artistic Family" and had contacts with Nomellini, Maragliano, Figari, Pennasilico, Viazzi and Sacheri . In 1893 he received the appointment of Academic of Merit at the Ligustica of Genoa. His works at the Gallery of Modern Art of Genoa-Nervi, the Museum of the Risorgimento, the Municipality of Genoa, the Picture Gallery of the Province of Genoa (Sun dying acquired in 1897 and at Courmayeur of 1901) and the Naval Museum of Villa Doria, in Genoa-Pegli. 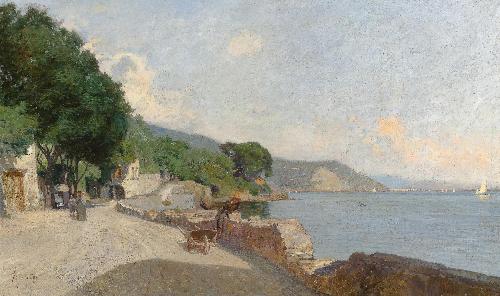