Born in Vienna on 9 March 1879, where he died on 11 August 1967. He trained at the Academy of Fine Arts in Vienna, under the guidance of the landscape painter Robert Russ (1867-1922) and the history painter August Eisenmenger ( 1830-1907). An esteemed portrait painter and refined landscape painter, he achieved notoriety especially for the snow-capped mountain views of his native Austria. At the beginning of the 20s of the twentieth century he went to Italy and extended his subjects to the wide landscapes of the Lombard lakes and the Mediterranean coast: from this period there are some views, with vibrant and luminous paintings, of Capri, Naples, Castellammare, Sanremo, Lake Maggiore and Lake Como. After a long stay in the Mediterranean regions, Arnegger returns to his homeland, where he will paint the monumental Alpine scenarios until his death, which took place in Vienna in 1967. Unlike many artists of his time, Arnegger approaches a pre-impressionist sentiment rooted in Romanticism and linked to the pictorial theories of the Barbizon School. His works are kept in private Italian and European collections (Stuttgart, Vienna, Amsterdam, Paris, Stockholm, Munich) and in the United States (New York and Chicago). 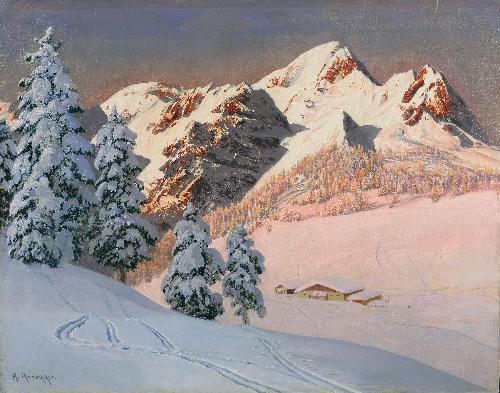