Mario Chianese was born in Sampierdarena in 1928, son of art (Nicolò Chianese), at a very young age he devoted himself to painting, treasuring the teachings of the home and then those of Antonio Mario Canepa, Ave Bassano and Antonio Schiaffino. His first solo show at the Rotta gallery in 1950, brought to the Ranzini gallery in Milan the following year. On these first two occasions he was recognized by critics such as Leonardo Borghese, Vincenzo Costantini, Arrigo Angiolini, Aurelio Belloccio, Giuseppe Grazzini, Emilio Zanzi, Giovanni Riva, a psychological maturity and pictorial skills already unusual in contemporary generations. In 1959 he was awarded the Biella prize, by a jury chaired by Felice Casorati who in the same year proposed him at the VIII Quadrennial in Rome. Since that date, his personal exhibitions have been numerous in many Italian cities and at national events. In the 60s he was part of the group of painters who started the activity of the La Polena gallery, where he had the opportunity to confront himself with the lively artistic realities of the time, gathering stimuli, measuring them to the interest in nature, which remains in every moment the object of his research, although there is no lack of a production of portraits and still lifes. From 1972 to 1981 he lived in Monterosso (SP) where the light-color study was carried out to the extreme limit. This is followed by a return to nature and the immediacy of direct landscape inspiration, also welcoming elements of conceptualization through the combination of samples of raw materials with painted landscapes, or the sequence of multiple images taken from different points of view and at different times. In 1974, on behalf of the Il Vicolo gallery, the catalog raisonné of his engravings with texts by G.Beringheli, V.Fagone, G.Giuffrè was published. In 1979 he was elected academic of merit of the Ligustica Academy of Fine Arts in Genoa and in the same year he was awarded the chair of painting which he held until 1997. In 1980 a monograph of the pictorial work was published by Gianfranco Bruno, who it will remain a fundamental text for further study. In 1985 the Municipality of Arezzo organized, curated by Guido Giuffrè, a personal painting and engraving of his at the Gallery of Modern Art of that city. In the same year the Municipality of Genoa set up a solo exhibition of his engravings at the Sant’Agostino museum as a commentary on the poetic texts of Carla Mazzarello. Mario Chianese in 1988 on the occasion of the anthology ordered from the Rubinacci gallery in Genoa all the texts written by G.Berigheli from 1961 to 1987 are published in the catalog. anthological review of painting and etching with a widespread essay by Guido Giubbini. Almost at the same time, the museum of Villa dei Cedri in Bellinzona (CH) publishes a notebook of his engravings by Matteo Bianchi and a text by Guido Giubbini entitled "Progressive shifting of vision". From 1990 to 2000 he was president and founding member of the association of Ligurian engravers and promoted three three-year courses of Italian engraving reserved for authors with the age of thirty-five, with the organizational collaboration of the Villa Croce museum. In 2005 he was awarded the Lifetime Achievement Award together with Vittorio Attardi, Walter Piacesi, at the Polanski Biennial of Engraving. In 2005 at Palazzo Cuttica in Alessandria, that municipality promoted one of its own engraving shows in the launch of the exhibition activity of the Cabinet of ancient and modern prints of that museum. In 2011 he accepted the invitation to participate in the Ligurian Biennale of contemporary art, a regional section of the Italian Pavilion of the Fifty-fourth Venice Biennale International Art Exhibition proposed by Vittorio Sgarbi as the inaugural exhibition of the newly restored Palazzo della Meridiana in Genoa. In 2017 in Turin, in the Don Quixote Space of the Bottari Lattes Foundation, the anthological exhibition "Time, light, earth, memory" opens, where over sixty years of studies and painting on nature are represented. The art of Chianese, with the exception of some studies, still lifes and portraits, is a painting of nature where little space is left to man-made and every topic is always taken up live. His subjects are the landscapes that develop from the epicenter of Gavi towards Bosio, Mornese, San Cristoforo, Francavilla, Arquata Scrivia, Vignole, Carrosio; some glimpses of Monterosso. In Genoa between the 40s and 50s the heights of Sampierdarena where he resided, later that of Sant’Ilario. Lover of Ligurian painting of the late nineteenth and twentieth centuries, he owned a collection of works by authors including: Ernesto Rayper, Santo Bertelli, Rubaldo Merello, Giovanni Battista Derchi; he was the foremost expert and one of the most important collectors of Dante Conte's work. 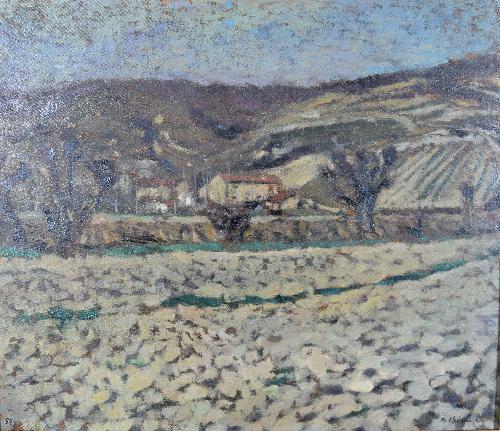