Born in Alessandria on 18 July 1853, died in Milan on 7 November 1919. He studied at the Brera Academy, still uncertain whether to pursue a career in painting or music. A precocious hearing infirmity soon destined him to the glory of our painting. His first paintings with a romantic and social subject are already pictorially well constructed, such that they can be considered as capital works not only in his vast production, but also among the masterpieces of Italian art of his generation. Two of these are: Last Days and The Viaticum. Her calm temperament and his reflective mentality, and perhaps even more so his increasing deafness which forever isolated him from the noises of the world, pushed him towards the divisionism which he definitively adopted. His first work, one of the best, which revealed his conversion, was exhibited at the Brera Biennale in 1891 under the title Alba. In 1883 he won the Fumagalli prize and in the course of his rapid career he won several gold medals: in Paris, in Nice, in Rome, in Turin, in Milan, in Barcelona, ​​in Dresden. His work, Festa di Festa, purchased for the Luxembourg Museum in Paris, procured him the insignia of the Legion of Honor, and other coveted honors he received from America and Germany. Characteristic, in the art of Angelo Morbelli, is the subtle dualism between the subjective cues of his works, sometimes pathetic, sometimes social, sometimes mocking, in contrast with the severe sobriety of the painting tradition that allowed him to escape dangers of that frivolous pleasure. He was indeed a painter with his eyes open on the easy antitheses of life, but this does not mean that he will not remain among the greatest representatives of Italian art. He will remain as a strong technician, before and after the adoption of divisionism, because he knew how to interpenetrate doctrinal technique and profound human sentiment in his work, as in the illustrious Christmas work of the remaining ones. Among the main and best known works by him are mentioned: Roman girl in costume; Annita; You know me?; Ciao, exhibited in Milan in 1881; Studio di testa and Tiziano, also exhibited in Milan in 1883 and 1886 respectively; Vecchioni, who appeared at the Venice Biennale of 1897; Winter siesta, exhibited in 1903. I due winters is preserved in the Pinacoteca di Alessandria with the other work La morte di Goethe. Milan central station in 1889; Last days; Winter at the Pio Albergo Trivulzio and Time of rain, are located in the Gallery of Modern Art in Milan; Viaticum, in that of Rome; A Christmas at the Pio Albergo Trivulzio, in the Civic Museum of Turin; The interior of the church of San Celso; Old socks; I remember when I was a girl; Dream and reality; Le parco (black and white); Among the gypsies; Wife; Afternoon; At sunset; Sunset on the Burano Lagoon; In the paddy field and Ave Maria, in the picture gallery of the Artists and Patriotic Society; The empty chair, in the collection of prof. Nicola Carraro in Milan; It is the hour that turns to desire; Pax; Sunset on the Lera; Wakefulness; Departure; Telegram; Self-portrait; Triptych of life, in the collection of Dr. Pietro Ruffini in Milan. He was a simple, naive and very modest man: in his work, for which he drew inspiration from the fate of those who drift from old age and misery, all the goodness of his soul is reflected. 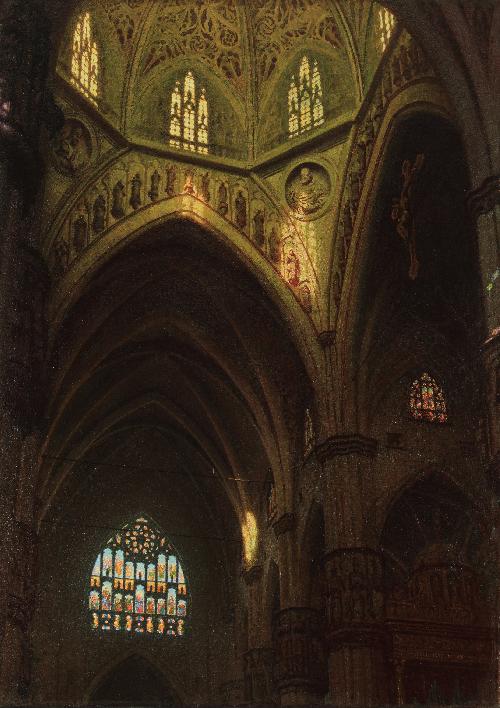