Born in Livorno in April 1830, died at Livorno May 14, 1903. He was a pupil of Pollastrini Academy in Florence, and he painted portraits and military subjects that quickly became popular. One of his first assignments was the mother of the conscript. One of his works is important in the Pinacoteca di Livorno: The departure of Garibaldi's volunteers for the Italian war of independence, which he executed in 1872; The death of Cosimo del Fante was bought by the Ministry of Education; Military and Vanguard were exhibited in Florence in 1884; Artillery was performed to commission the Duke of Aosta. Many other paintings and portraits are in the Piedmont. He participated in almost all the Italian exhibitions and in 1900 took part in the competition Alinari with Our Lady of the flowers. He was the uncle of the painter Giovanni Bartolena which, indeed, he executed a portrait in uniform today in the collection of bersagliere Innocenti of Turin. 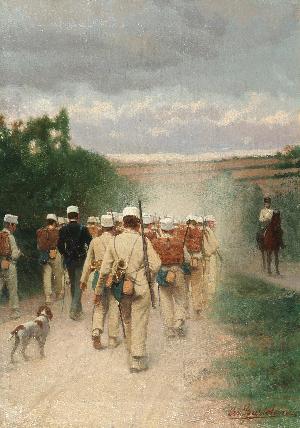