Born in Davesco near Lugano December 6, 1815, died August 1, 1884 in Turin. His early education was in Odessa, Russia, where he moved with his family in 1820. All ?? age of eleven, after studying the Capuchin Fathers, goes to work at a bookstore and print dealer, starting on their own to practice in design. Towards 1828 is perfected in perspective at Nannini, painter and stage designer Emilia pupil of the famous architect and designer Alessandro Sanquirico Milan. Among his early works, as well as sets and decorations interior d ??, also tackles subjects and shape what will be his favorite theme, and that would make him famous, the panoramic view, for which he was fond of the distemper. Achieves fame right now with so-called ?? ?? cosmorami, panoramic views of Odessa to look within a kind of optical chamber, which he calls ?? ?? optical views. Between 1839 and 1940, thanks to the support of Prince Mikhail Vorontsov, governor of the southern provinces of ?? Russian empire, and his wife Elisaveta Branickaja, perfected in Italy staying in major cities d ?? art, including Naples and Rome, where it performs a series of views and lithographs. Again in Odessa, receiving important commissions as a landscape painter and portraitist of the Russian monarchs. In 1843 he left Russia in 1844 to 1845 and he moved to Milan, where he opened an atelier. In 1845 he exhibited the first time all ?? Academy of Fine Arts of Brera and two years later to the Promoter of Fine Arts in Turin. Between 1848 and 1853 he moved to Lugano. Between 1851-1852 and until 1861 traveling continuously throughout the ?? Europe and the Mediterranean, bringing you various studies: in Paris and London realizes some famous views in watercolor, then translated into print (for example, with Hyde Park Cristal Palace); in Turin in 1851 are engraved and printed his twelve drawings bound in an album with views of the city and a large lithography Panorama of Turin; realized in 1852 for the Sardinian government sixteen views tempera railway Turin-Genoa (1852, Railway Museum of Rome), which will be drawn in London fifteen cromolitografia (Views on the railway between Turin and Genoa, Day & Son, London 1853) . In 1853 he moved to Turin, where, in 1855, performs a series of Views of the Crimea, using material from his youth, also ?? they translated into lithography and published in London (The beautiful scenery and places of interest chief Throughout the Crimea. .., Day & Son, London, 1856). In this period he lives mostly in London (three views signed and dated 1856 - Alt-na-Guithasach and Loch Muick, Ballater and Buckingham Palace - are preserved in the Royal Library at Windsor Castle), but continues to travel for ?? Europe and the Middle East. In 1855 he made two views depicting the ?? Opening of submarine telegraph in La Spezia for Prince Eugene of Savoy Carignano; in 1859 is the result of ?? Franco-Piedmontese during the second war of independence with ?? l ?? assignment, from the publishers of London Day & Son, to illustrate the events of the war in Italy: on this occasion draws from the true places of the military campaign in one hundred and six views, almost all tempera - of which only forty will be translated to the press (the War in Italy, Day & Son, London, 1860) - delivered at ?? national Exhibition in Florence in 1861 and in later donated by the Prince of Savoy Carignano to the City of Turin (Torino, National Museum of the Risorgimento, the notebooks with the preparatory drawings are kept at the Banco di Roma for Switzerland in Lugano and a private collection in Milan). In Turin, since 1852, working for the royal family receiving, May 9, 1862, the license ?? painter real story ??. He exhibited at the Promotion of Fine Arts in Turin (1847-48; 1851-52; 1855; 1884 and 1892, retrospectives) and at the Royal Academy in London (1855-1859). Work diligently until August 1884, when died at his home in Turin, a year after marrying the young Adelaide Decarolis. Many of his paintings and lithographs are preserved in Italian and foreign collections, public and private: in Turin in the Gallery of Modern Art of the City Museum ?? (Corpus Christi procession in via Garibaldi (Dora Grossa in the day of Corpus Christi), 1947; Piazza Castle, 1852; King Vittorio Emanuele II, Cavour, the Ministers and the Court down the staircase of the Senate after the inauguration of the V ?? Legislature Subalpina, 1853; Fireworks ?? artifice in Piazza Vittorio in Turin, 1853; ideal view of Po in Turin, 1863; Porto Eastern, 1884; an album of 97 drawings and watercolors of Lugano and the lakes area of Lombardy and Piedmont) and the National Museum of the Risorgimento (the one hundred and six tempera on military campaigns of the war of Independence already mentioned), in Milan in the Galleria d ?? Modern Art (L ?? boat of the Sultan of Turkey spanning the Bosphorus, 1847, View of Messina Strait, and before 1860, 1860), in Masnago (Four Views of Villa Litta at Linate, 1852) , in Lugano (d ?? Art Museum: View of Lugano, Piazza and Riva del Grano, 1849; View of Lugano, Piazza Grande, 1849; Military exercise at Basse di Stura, 1854). Are cited again: Monviso, 1880, and on the banks of the Bosphorus (Turin, collection Ostorero), View from the hill of Turin (Torino, collection Leumann), Views of Greece (Milan, collection Candia). 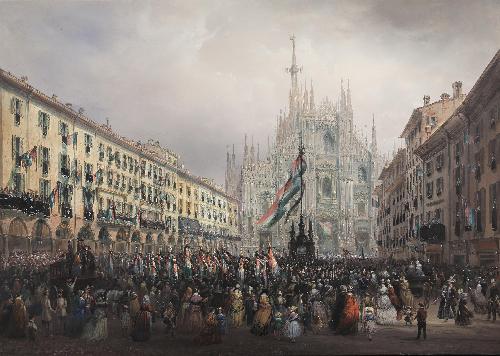