Born in Piacenza on 4 May 1835 and died in the same city on 5 January 1911. During his humanistic studies at the "Gazzola" Institute in Piacenza, he attended the lessons of the painter Lorenzo Toncini as an amateur; he then attended the studio of the ornatist painter Bernardino Massari. From December 1854 he stayed for several years in Rome without enrolling in any Academy and here he attended the studio of the landscape architect Alessandro Castelli, who initiated him to a careful study of reality. He then comes into contact with Nino Costa and, through them, with the circle of Nazarenes and the French, German and English landscape painters of the romantic current (among others, Arnold Böcklin). After the failed attempt to volunteer in the Second War of Independence, he moved first to Bologna (1860), then to Milan (1862), and finally, together with his family, to Florence (1863), where he approached the great Macchiaioli artists. . In the meantime he exhibited in Piacenza (Galleria Ricci-Oddi, Palazzo Mandelli) and at the Turin Fine Arts Exhibition, since 1861, where one of his views of the Bardi Castle was purchased by Prince Amedeo of Savoy (1867). In 1870 he returned to live in Piacenza, alternating holiday periods in the paternal villa of Roncolo di Groppallo: from here he draws his famous landscapes inspired by the Apennines and his gracious rural views of shepherdesses and herds. From 1870 he exhibited at the Exhibition of Fine Arts in Parma and at the Promoter Society for Fine Arts in Milan, receiving excellent critical acclaim. He moved back to Florence, from 1875 to 1895, continuing to take part in various exhibitions: among which, in Milan, the National Exhibition (1881) and the Permanente (1893), in Turin, the National Exhibition (1884) and the Promoting Society of Fine Arts (1894). In November 1895 he moved permanently to Piacenza, accepting the invitation of the "Gazzola" Institute to succeed Pollinari in the chair of Figure, which he held until 1908. He still exhibited at the Turin Promoter (1896, 1898, 1899, 1900 ), at the Festival of Art and Flowers in Florence (1897), at the II International Exhibition of Fine Arts in Venice (La Biennale, 1897) and at the Italian General Exhibition (1898). At the beginning of the twentieth century his paintings were purchased from important permanent collections: Autumn from the National Gallery of Modern Art in Rome (1900), Letizia from the Duchess of Genoa (1900), Above from the Civic Museum of Turin (1902 ). A few months after having exhibited paintings and drawings in one of his personal shows in Parma, he died in Piacenza on 4 January 1911. His works are kept in various Italian and foreign public and private collections: among which, the Ricci-Oddi Modern Art Gallery in Piacenza (the oils: Passo difficile, 1870, Appennino Piacentino (Val Nure), 1875-1877 circa, Head of a mule, circa 1880, Heads of sheep, circa 1880, The house of Roncolo with the girls making the stocking, circa 1880-1887, Return from the market after the snowfall, before 1887, The watering of the flock in Rio Restano, around 1890, The mountains at the house of Roncolo with Tacchini, around 1890, The Apennines near Roncolo di Groppallo, around 1890, Rebels, around 1890-1895, Autumn in the beech forest, around 1895, Siesta or resting sheep, around 1900, noon, mealtime, around 1900, La source dei Lamoni, around 1890-1895; the drawings: View of the mountains, 1850, Does the graceful friend deserve so much ?, around 1856, Caricatures and dancers, Caricatures, Landscape with plants, 1867, Punta della Mangosa, around 1867, Piacenza Apennines, 1873-1875, The cow smashed, around 1880-1890, Head of a young mountaineer, around 1880-1890, Boscaglia, 1886), the Civic Museums of Palazzo Farnese di Piacenza (Pastorella grazing, 1880, Two sheep and a donkey, 1880, I due cousini, 1890 ), the Modern Art Gallery of Rome (The first to make the route, 1884, purchased at the National Exhibition of Turin, Autumn, 1900), the Modern and Contemporary Art Gallery of Turin (The whistle of the locomotive, 1880, Above or Recall, 1902), the National Gallery of Parma (the sketches Rocky slope, 1867 and Montoncino squatted, about 1880, the latter purchased by the Ministry of Education in 1914, the oils Heads of sheep, 1850, Friends, 1885, Bosco, 1890, Salici, 1890), the Stuard Art Gallery in Parma (the oils, from 1850, Rural landscape, Peace montana, Sheep and Rural scene with figures). 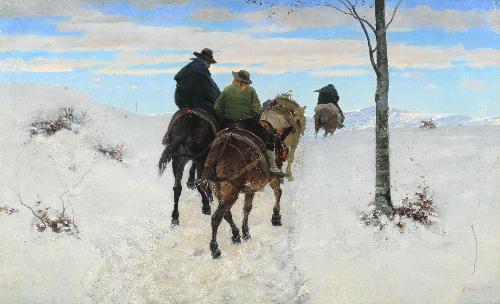 Muleteers on the Apennines