Born in Genoa in 1841, died in Sam-pierdarena, in extreme misery, on June 27, 1908. He wanted to follow the career of his father, who was also a painter, and enrolled at the Genoa Ligustica Academy, where he received various awards and in 1862 he also obtained the Marquis Durazzo pension, having renounced Virgilio Grana who had won it. He therefore went to Florence and stayed there for five years, studying the ancients, and perfecting himself under the guidance of Ciseri and Pollastrini. There he knew and followed the movement of the Macchiaiuoli, as is proved by his works better than him. In 1870 with Sordello he won the Prince Oddone prize. He was an unequal artist, both in the tendency and in the value of the paintings, and he treated with preference the historical and genre subject, more rarely the landscape. At the retrospective exhibition of nineteenth-century Ligurian painting, ordered in Genoa in 1926, his works appeared: La monaca morta, property of comm. Giuseppe Bertollo of Genoa; Page who writes, owned by the local Chamber of Commerce; The oratory of San Rocco a Prà, belonging to the rag. Paolo Ghiara; the sketch of the portrait of the benefactor Tebaldini, of the Pio Istituto dei Ciechi; La Foce (sketch); Water carrier, property of Avv. Adolfo Piotti. Other works worthy of mention are: Motivo near Rosciglione, which appeared at the Venice International in 1901; A walk; Petrarch induces the painter Pompeo Memmi to stealthily portray Laura; Sappho meditating on suicide; Looting and massacre of Muslims in a house in Bulgaria; The island of Favignana; A Florentine storyteller; The death of Anita Garibaldi; Politics in the convent; The village organ; In time .... sad; For love; A beautiful morning in Pegli; The confession of Louis XI. Commissioned by the banker D. Parodi of Genoa he also painted a series of scenes from the "Promessi Sposi", namely: Don Abbondio accompanies the Unnamed; Father Cristoforo in the house of Agnese; Lucia at the convent of Monza; Renzo to doctor Azzeccagarbugli. 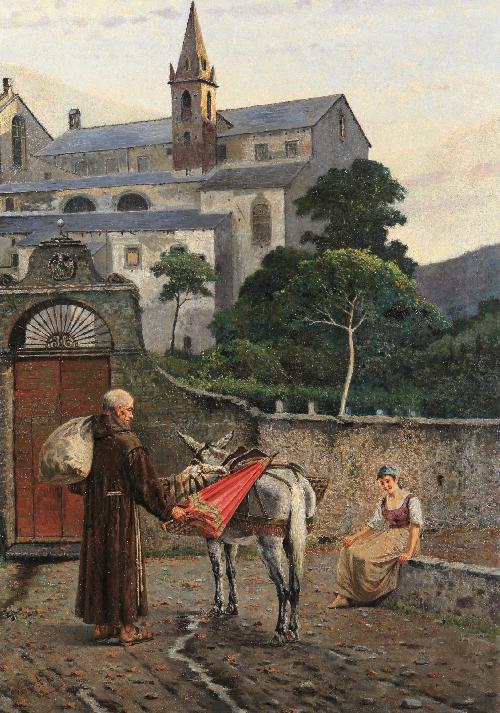